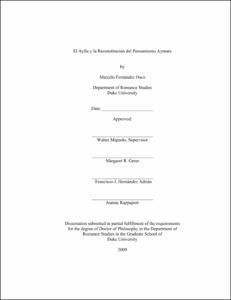 This dissertation focuses on the intellectual and political trajectory of the Taller de Historia Oral Andina (THOA), an autonomous indigenous working group in which I participate, alongside other Aymaras and Quechuas from Bolivia. Grounding itself on the recuperation of ancestral knowledges of the ayllu and its reconstitution, this group has been seeking to decolonize knowledge and therefore society at large.

I have used an oral history methodology, revaluing the word and knowledge of the forefathers and foremothers. They are the inheritors and experts of the movement of caciques and representatives of communities and ayllus, who in the early twentieth century focused on defending their territorial rights on the basis of old colonial titles against the attacks of the landowning oligarchy. Using this methodology, I have questioned such principles of Western research as subject-object, Cartesian rationalism, the instrumental character of research, social discrimination, and epistemic racism in academia.

Guided by the Aymara axiom of qhip nayr uñtasis sarnaqapxañani, looking back to walk forth, as a pluriversal way of thinking that points the contemporaries to their immediate past and deep communal memory, out of whose relation critical sense emerges, it was possible to articulate the process of "Reconstitution and Strenghtening of the Ayllu," whose objective is the reconstitution of political and social organizing forms of thought, as well as the "renewal of Bolivia."

The concept of complementary duality is a salient aspect of Aymara and Quechua ontology, since together with triadic and tetralectic models, these are principles structuring ayllu knowledge, social organization, and politics. These principles are very different from the paradigms of dialectical materialism or the politics of "left" and "right." Despite colonial practices and colonialism, these principles still govern ayllu or communities, as paradigms learnt in the experience of work and needs, through the long observation of the cosmological movement and integration with animal and plant kingdoms, with mountains and vital or energetic fluids making up beings in the environment, all of which are considered as brethren and protecting parents.

Aymara and Quechua thought are wholistic and integral. Among their most important axes are parity and complementarity. These constitute a kind of vital codes, which in a way similar to deoxyribonucleic acid (DNA) are found in almost all beings, in their most diverse modality, and therefore are the guarantors for the transmission of values and survival.

The THOA belongs to the range of lettered indiginous thinkers, such as Felipe Waman Puma de Ayala and Juan de Santa Cruz Pachacuti, as well as of the work Dioses y hombres de Huarochirí, the couple Katari-Amaru, or Eduardo Leandro Nina Qhispi - creator of the principle of brotherhood, who proposed the "renovation of Bolivia" -, among others who through our actions reivindicate the wisdom of the ayllus, which expresses a different way of doing politics. Bolivia's current President, Evo Morales, would be the starting point of that model, whose goal is the suma jaqaña or "good living".