Sahibs and Shikar: Colonial Hunting and Wildlife in British India, 1800-1935 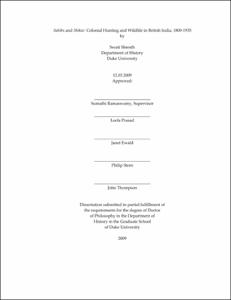 This dissertation explores the colonization of wildlife in nineteenth and early twentieth century British India. It discusses hunting and colonial policies on wildlife to explore the political, social and cultural concerns that influenced British interactions with Indian wildlife, with their compatriots and with natives. Hunting, I argue was deeply implicated in the exercise of power in all these interactions. British policies on wildlife in the nineteenth century favored a neat categorization of wild animals as "vermin and "game." By the beginning of the twentieth century however, with decreasing numbers of carnivores and native opposition, the perceived complementarily between game preservation and vermin extermination was shattered. While the colonial administration continued both these policies, they also actively sought to formulate policies to protect all animals in areas designated as sanctuaries and national parks. Colonial hunting as it emerged from the late nineteenth century reflects the changing nature of the colonial state and a new imperial ideology of dominance. I also argue racial differences between the colonialists and colonized were articulated in the domain of hunting. While hunting represented domination of nature and natives, the "colonial hunt" also came to signify a paternal benevolent British rule. The importance given to hunting and to the notion of fair play in their hunting served to "identify" the moral and physical superiority of British rulers. The new ideology of paternalism was realized in the figure of the hunter-officer, the Sahib who in hunting dangerous carnivores was seen to act as a protector of the native. The changing nature of the colonial state and creation of racial differences also had a profound impact on colonial society which became increasingly self conscious of its own identity and image. Given the metropolitan engagement with social Darwinism and their location on the fringes of civilization as it were, colonialists became the center of metropolitan preoccupation with racial contamination. The emphasis on fair play, I argue reflects the efforts of the colonial elite to enforce a model code of conduct on its members and reassure an anxious metropole of the racial distance with the native. Policing behavior of their own, through categories like fair play was therefore essential to the agenda of creating racial differences. Due to a perceived connection between hunting, power and privilege, hunting also played an important role in social relations in colonial society. As hunting came to be regulated by laws by late nineteenth century, it often became the focal point of tensions in class and power within the colonial elite on the question of access to animals.