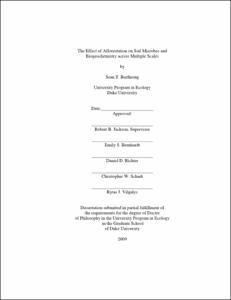 However, the rapid growth and planting disturbance due to afforestation can have deleterious effects on soils and hydrology that undermine its benefits in some locations. The effects on hydrology include depletion of groundwater and reduced or complete elimination of surface water flow. Additionally, groundwater use can lead to increased concentrations of salts and trace metals in soil that could be deleterious for future plant productivity. Plantations have also been shown to acidify surface soils and stream water and to reduce soil carbon and nitrogen.

The goal of Chapter 1 is to evaluate how afforestation across the globe affects mineral soil quality, including pH, sodium, exchangeable cations, organic carbon, and nitrogen, and to examine the magnitude of these changes in regions where afforestation rates are high. To control for different initial soil conditions across the globe, I examined paired sites of afforested plantations and controls. Controls included land-use types that are frequently afforested, such as grasslands, shrublands, and pastures. I also examined potential mechanisms to reduce the impacts of afforestation on soils and to maintain long-term productivity. Across diverse plantation types (153 sites) to a depth of 30cm of mineral soil, I observed significant decreases in nutrient cations (Ca, K, Mg), increases in sodium (Na), or both with afforestation. For the global dataset, afforestation reduced soil concentrations of the macronutrient Ca by 29% on average compared with native controls (p<0.05). Afforestation by Pinus alone decreased soil K by 23% (p<0.05). Overall, plantations of all genera also led to an average 71% increase of soil Na (p<0.05). Average pH decreased 0.3 units (p<0.05) with afforestation. Afforestation caused a 6.7% and 15% (p<0.05) decrease in soil C and N content respectively, though the effect was driven principally by Pinus plantations (15% and 20% decrease, p<0.05). Carbon to nitrogen ratios in soils under plantations were 5.7-11.6% higher (p<0.05). The major implication of these results are that in several regions with high rates of afforestation, cumulative losses of C, N, Ca, and Mg are likely in the range of tens of millions of metric tons. The decreases indicate that trees take up considerable amounts of nutrients from soils; harvesting this biomass repeatedly could impair long-term soil fertility and productivity in some locations. Based on this study and a review of other literature, I suggest that proper site preparation and sustainable harvest practices, such as avoiding the removal or burning of harvest residue, could minimize the impact of afforestation on soils. These sustainable practices could in turn slow erosion, organic matter loss, and soil compaction from harvesting equipment, maintaining soil fertility to the greatest extent possible.

Soil microbes are highly diverse and control most soil biogeochemical reactions. Given the observed changes in Chapter 1, in Chapters 2 and 3 I examined how microbial functional genes and biogeochemical pools responded to the altered chemical inputs accompanying afforestation. I examined paired native grasslands and adjacent Eucalyptus plantations (previously grasslands) in Uruguay, a region that lacked forests before European settlement. Along with measurements of soil carbon, nitrogen, and bacterial diversity, I analyzed functional genes using the GeoChip 2.0 microarray that simultaneously quantified several thousand genes involved in soil carbon and nitrogen cycling. Plantations and grasslands differed significantly in functional gene profiles, bacterial diversity, and biogeochemical pool sizes. Afforestation decreased both bacterial diversity and richness compared to grasslands, though diversity remained relatively high. Most grassland functional gene profiles were similar, but plantation profiles generally differed from grasslands due to differences in functional gene abundance across many microbial groups. Eucalypts decreased ammonification and N-fixation functional genes by 11% and 7.9% (p<0.01) which correlated with decreased microbial biomass N and more NH4+ in plantation soils. Chitinase, an important carbon polymer degrading enzyme, decreased in functional gene abundance 7.8% in plantations compared to grasslands (p=0.017), and C polymer degrading genes decreased by 1.5% overall (p<0.05), which likely contributed to 54% (p<0.05) more C in undecomposed extractable soil pools and 27% less microbial C (p<0.01) in plantation soils. In general, afforestation altered the abundance of many microbial functional genes corresponding with changes in soil biogeochemistry. These changes were driven by shifts in the whole community functional gene profile, not just one or two constituent microbial taxa. Such changes in microbial functional genes correspond with altered C and N storage and have implications for long-term productivity in these soils.

The area studied in Chapters 2 and 3 lies near the middle of a precipitation gradient that stretches across the Rio de la Plata grasslands. In Chapter 4 I studied if the effects of afforestation on soil C and N from Chapters 2 and 3 varied with different precipitation levels. The effect of afforestation on soil C has been shown to depend on mean annual precipitation (MAP), with drier sites gaining C and wetter sites losing C with afforestation. This precipitation dependence of soil C changes with afforestation may be controlled by changes in soil nitrogen (N) cycling. In particular, loss of N due to leaching after afforestation could lead to soil C losses. However, the link between C and N changes due to afforestation has primarily been suggested by models and to my knowledge has never been explicitly tested across a precipitation gradient. The goal of this study was to test how precipitation affects changes in labile and bulk pools of soil C and N across a precipitation gradient, which will provide novel insight into the linkage between land-use change, different pools of soil C and N, and precipitation. I conducted this study across a gradient of precipitation in the Rio de la Plata grasslands of Argentina and Uruguay which ranged from 600mm to 1500mm of precipitation per year. The sites were all former grasslands that had been planted with Eucalyptus. I found that changes in bulk soil C and N were related to MAP with drier sites gaining and wetter sites losing C and N (R2=0.59, p=0.003), which supports the idea that N losses are strongly linked to C losses with afforestation. C and N in microbial biomass and extractable pools followed similar patterns to bulk soil C and N. Interestingly, losses of C and N decreased as the plantations aged, suggesting that longer rotation times for plantations could reduce potential soil carbon and nitrogen losses. These results indicate that afforestation is still be a valuable tool for carbon sequestration, but calculations of the benefits of afforestation must take into account site factors such as age and precipitation to accurately calculate total sequestration benefit and ensure continued high productivity and carbon sequestration.

In conclusion, afforestation could be an effective tool for carbon sequestration. However, its benefits need to be carefully weighed against its costs for soil such as reduced microbial diversity, decreased soil microbial functional capacity, losses of soil organic matter, and nutrient depletion. Careful management and consideration of afforestation is needed to ensure the greatest benefits with the least long-term damage to soils.