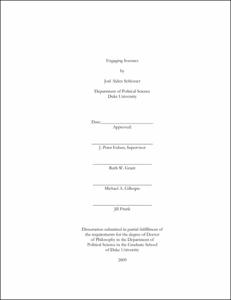 This dissertation considers the role of the critic in democratic political culture by engaging Socrates. Since Socrates so often stands as an exemplar for many different styles of critical activity, both in political rhetoric and in popular culture, I address the roots of these many figures of Socrates by examining the multiple aspects of Socrates as they appear in Plato's dialogues. Starting from the different metaphors that Socrates uses to describe himself - the stingray, the master of erotics, the midwife, the practitioner of the true political art, and the gadfly - I parse these different strands of Socrates' character and assess their coherence. While each of these descriptions captures a different angle of Socrates' activity vis-à-vis Athenian democracy, I argue that together they also hold one essential aspect in common: Socrates' strange relationship to Athens as both connected and disconnected, immanent in his criticism and yet radically so. As strange both in the context of Athens and in relation to his interpreters, I further advance that the figure of Socrates suggests a kind of political activity committed to disturbance and displacement while also working across, with, and against conventional boundaries and languages. Moreover, I maintain that the Socrates suggests new forms of critical associations that take up his practice of philosophy in democratic culture today.