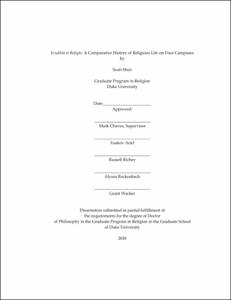 This dissertation examines the relationship between religion and higher education in the United States through analyses of the religious histories of four distinct educational institutions in North Carolina’s Research Triangle—Duke University, Meredith College, North Carolina Central University, and the University of North Carolina at Chapel Hill. It places three seemingly contradictory scholarly representations of this relationship in conversation with one another. The first, represented by evangelical historians George Marsden and John Sommerville, claims that American higher education has come to be characterized by exclusive secularism. The second, represented by scholars of education, including Tricia Seifert, Lewis Schlosser, and Sherry Watt et al. claims by contrast that Christian privilege continues to obstruct the full inclusion of religious and non-religious minorities. And a third, represented by Rhonda and Jake Jacobsen, contends that historical Protestant and secularist predominance have been transcended by inclusive pluralism in the “postsecular” 21st century. This dissertation draws on archival research, participant observation, interviews, quantitative survey analysis, and secondary sources to demonstrate how Protestant, secular, and pluralist forces have coexisted and interacted throughout these four institutions’ histories. It illuminates how their campus religious climates have evolved in distinct ways through contingent interactions among these forces conditioned by a variety of institutional identity factors, including race, gender, affiliation, prestige, and geographical reach. As a result, we see that the relationship between religion and higher education is not uniformly characterized by either Christian privilege, exclusive secularism, or inclusive pluralism. Distinct institutional trajectories shape coexisting forms of privilege, secularism, and pluralism that interact in specific contexts, producing unique campus religious climates that shape undergraduate identity formation.