Technics Before Time: Experiencing Rationalism and the Techno-Aesthetics of Speculation 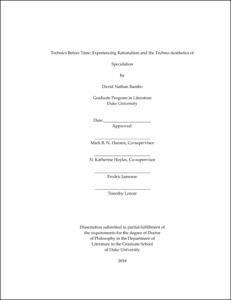 Technics Before Time: Experiencing Rationalism and the Techno-Aesthetics of Speculation proposes a philosophy of technicity, or a theory of what it means for tools, techniques, and technologies—or simply technics—to be technical. Logically anterior to the everyday utility of technical objects as well as to the notion of technics as prosthetics for human faculties, technicity is a category that allows me to elaborate diverse and creative participations in technical existences without presupposing an essentialist or techno-determinist ideology. Whereas other philosophies of technics delimit technicity to a presupposed range of what a technical object can be, I attend to the structures and processes that define a technical reinvention of reality. This opens the technical, including the human’s participation in it, well beyond both extensions of physical laws of nature (à la Gilbert Simondon) and consciously liveable memories (à la Bernard Stiegler).

The dissertation has eight chapters organized into three parts, each with their own case study from popular culture that both exemplifies and challenges the theoretical arguments. Part One examines how effects pedals used by electric guitarists, known as “stomp boxes,” mediate sound across layered orders of magnitude and otherwise incommensurable domains of phenomena. This clarifies the superpositional structure of intentional acts in Stiegler’s underdeveloped notion of technics as “organized inorganic matter”; and it undermines Simondon’s exclusion of human and cultural aesthetic values from the physico-chemical functioning intrinsic to technics. Part Two moves to the domain of technical subjects, specifically the creative thought process by which transcendental phenomenology linguistically constructs concepts to explain worldly genesis anterior to all objectification. German philosopher Eugen Fink’s speculative critique of phenomenology foregrounds the written performance of conceptualizing the pre-conscious creation of horizons of experience, which finds a pop cultural analogy in the rules systems, instruments of play, and collective world building in tabletop role-playing games such as Dungeons & Dragons. Pushing Stiegler’s technical critique of phenomenology to its logical denouement, I convert transcendental subjectivity into a transcendental technicity that integrates human thought into a broader, distributed field of technical cognition. Part Three finalizes the formulation of technicity proper, not just its objective and subjective forms, with a speculative theory of invention that pertains to material processes at a general, neutral level anterior to their sociocultural and conscious integration. On the theoretical side, I deploy Alfred North Whitehead’s process philosophy to fill out the systematic categorization of technicity so that it obtains maximum applicability to actually existing technics. On the techno-aesthetic side, I levy my novel perspective against the intuitive interpretation that blood and gore in computer games represent violence. Instead, analyzed according to the technical form of the game, gore functions first and foremost as a non-mimetic operator of a computational structure that exists through a human player’s participation.

The dissertation therefore intervenes into two broadly conceived trajectories of media theory: the prosthetic interpretation of technical media and the media-specific analysis of nonhuman phenomena. My elaboration of technicity provides an explanation of how each trajectory correctly understands its target phenomena according to its presupposed domain of abstraction. Understanding technicity as a generic process of material invention offers a productive alternative to recent speculative philosophies that oppose the human to the nonhuman. Instead, it specifies the idea of technics in relation to the more general notion of the medium as a ground for particular existences, and it recognizes the inseparability of rational concept and the sensible particularities of experience. To the extent that the human, in its experience and social organization, is technically constituted, grasping technics at such a philosophically general level can expand the disciplinary range and creative potential of the humanities.