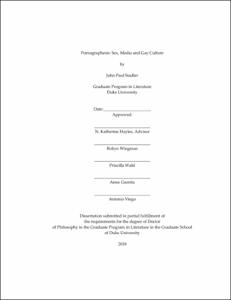 How does gay pornography inscribe gay identity, and what might that inscription reveal? Pornographesis asks how gay pornography has come to organize the feelings, desires, pleasures, memories, attachments, and identifications of the male homosexual subject. LGBTQ scholarship tends to forego a rigorous study of gay erotic media altogether in favor of less sexualized, more recuperable objects. As a result, the representational histories and media cultures of gay pornography remain largely obscured from contemporary discourse. This dissertation examines regimes of gay pornography that make visible its shifting contours. Unlike other studies that take pornography as their subject, mine does not aim to reduce pornography’s meaning to monolithic postures of either pleasure or harm, but rather locates the possibility for vexed in-betweens, discontinuities, and ruptures. The central question of Pornographesis is not just how gay pornography inscribes gay identity, but how that inscription changes over time and according to circumstance. Across four sequential eras, I examine notable shifts in the narrative structures, cultural position, and reception practices of gay pornography. I link these shifts to changes in media, from 8 and 16mm film to video, print, telephonic, theatrical, and digital technologies.

Situated as an Americanist project, Pornographesis engages the historical materialism, media shifts, and narrative dynamisms that attend its development from the 1960s to today. Following Laura Kipnis’s notion that pornography is one of culture’s honored sites for working through social problems, I approach gay pornography as an engagement with the “problem” that homosexuality has been thought to constitute. In each era, gay pornography inscribes identity around a different set of relations to produce figures that range from necessarily clandestine, to defiantly perverse; from obsessively technophilic, to exploitatively entrepreneurial. Moreover, each era reveals the many and changing demands that the producers and viewers alike place on pornography: that it be beautiful, liberated, narrative, risky, safe, carnal, political, elegiac, honest, authentic, masculine, interactive, and so forth. As such, this dissertation argues that there is not just one uniform gay pornographic culture, but many. The mercurial quality of gay pornography delivers not just pleasure, but critical intervention in political crises, alternate imaginings of social structures, and valuable contestation of the rigid demands of heteronormative masculinity. Pornographesis makes the case that the study of gay male pornography is not merely instructive, but is in fact crucial for comprehending modern gay identity.