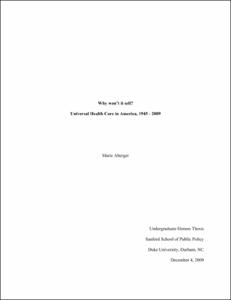 View / Download
1.7 Mb
Date
Author
Aberger, Marie
Repository Usage Stats
469
views
1,428
downloads
Abstract
This project examines the language used to frame universal health care reform from 1945 to 2009, focusing on four frames: morality, efficacy, personal vulnerability, and fear of government. It analyzes whether the frames used by the opponents and proponents of reform evolved by researching three health care debates: President Truman from 1945-1950, President Clinton from 1993-1994, and President Obama in 2009.The analysis focuses on speeches given by the presidents, advertisements produced by interest groups, and newspaper coverage of the debates. For all three presidencies, fear of government was the frame most commonly used by opponents of reform in advertisements while morality was the frame most commonly used by proponents. This suggests that the language has not evolved significantly over the past sixty years and provides insight into why universal health care reform continues to fail. Notably, however, there is a trend in the Obama administration toward utilizing the personal vulnerability frame. Ultimately, this project found that self-interested arguments are the most effective, and therefore opponents should continue to address people’s fear of government while proponents should follow President Obama’s lead in utilizing the personal vulnerability frame.
Type
Honors thesis
Department
Public Policy Studies
Subject
health care
framing
Truman
Clinton
Obama
Permalink
https://hdl.handle.net/10161/1682
Citation
Aberger, Marie (2009). Why won’t it sell? Universal Health Care in America, 1945 - 2009. Honors thesis, Duke University. Retrieved from https://hdl.handle.net/10161/1682.
Collections
More Info
Show full item record