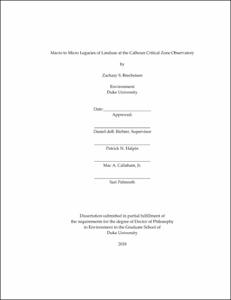 In this dissertation, human-critical zone (CZ) dynamics are explored at the Calhoun Critical Zone Observatory (CCZO). The 190km2 CCZO is part of a broader landscape in the southeastern US which was subjected to extensive agricultural degradation for approximately two hundred years before cultivation was abandoned sixty or more years ago. The physical and functional dynamics of land abandonment were explored at three spatial scales herein: 1) landscape geomorphology and spatial patterns of CZ processes, 2) microtopographic roughness of hillslopes being diagnostic of landuse history and, 3) plot-based soil investigations of three chronosequence landuse histories approximating the temporal successional progression from pre-disturbance forested landcover into deforested agricultural management and finally into secondary old-field mixed pine forests which typify the post-agricultural landscape of the Southeastern US.

In the first chapter it was observed that most of the landscape area consists of hillslopes and that quantifying the spatial patterns and connections of hillslopes is important for understanding landscape function and evolution. Landscape network structure was described and quantified with demonstration of how it drives the landscape processes of soil erosion, bedrock weathering, and landcover. In this work, interfluve (hilltop) networks were ordered according to Hortonian methodology at the CCZO in South Carolina with corresponding “hillshed” areas delineated and bounded at the base by valleys and streams. At the CCZO, low-order interfluves are abundant, small, and steep with low elevation, while high-order interfluves are fewer, broad, and relatively flat with high elevation. We further estimated that geologic erosion rates of 1st order interfluves were two orders of magnitude higher than on those of 4th or 5th orders, bedrock weathering is modeled to be deepest and most spatially variable on 1st order interfluves with depth and depth-variability decreasing as interfluve-order increases. It is further shown that agriculture and private land ownership has concentrated and persisted to the greatest extent on high-order interfluves where erosion has been far less serious than on low-order interfluves. We conclude with an assertion that land-management and many fields of environmental research can benefit from ordered-interfluve networks and corresponding hillsheds much as they have benefited from the concepts of stream-orders and watersheds.

The Calhoun Critical Zone Observatory in the Piedmont region of South Carolina is an ancient, highly weathered landscape which was transformed by historic agricultural erosion. Following the conversion of hardwood forests to cultivated fields and pastures for ~200 years, excess runoff from fields led to extreme sheet, rill, and gully erosion across the landscape. Roads, terraces, and a variety of other human disturbances also increased the landscape’s surface roughness. By the 1950s, cultivation-based agriculture had been abandoned in most of the Southern Piedmont due to soil erosion, declining agricultural productivity, and shifting agricultural markets. Forests dominated by loblolly and shortleaf pine species, have since reforested much of the landscape. There are, however, isolated hardwood forest stands and even entire small watersheds dotting the landscape which are believed to have never been clear-cut or plowed. These rare forests are expected to have special aesthetic and scientific research value as a Piedmont pre-disturbance reference condition. Hardwood reference forests may be of interest to hydrologists, environmental historians, biogeochemists, geomorphologists, geologists, pedologists, and others interested in understanding the legacy of landuse history in this severely altered environment. In this work we demonstrated how Light Detection And Ranging (LiDAR) digital elevation model (DEM) data and microtopographic terrain roughness analysis (MTRA) of fine scale variation in terrain slope can be used in concert with historic aerial photography, contemporary remote sensing data, and field ecological interpretation to identify low human-impact, minimally eroded, reference hardwood stands, hillslopes, and even small watersheds for study and conservation.

Following the identification and selection of reference hardwood forests as a landuse history treatment for intensive study, novel method development was needed in order to accurately and effectively study the belowground dynamics of these forests and other landuse histories of interest. One of the analytical tools necessary for this was the development of effective and reliable Field-Portable Gas Analysis tools (FPGA). FPGAs have been developed at the Calhoun Critical Zone observatory for the measurement and monitoring of deep soil O2 and CO2 under different landuse history treatments. The tools and methodology developed and presented here are extremely cost-effective, are physically very light, compact, and robust for field deployment and reliable soil gas monitoring. The FPGA platform integrates off-the-shelf components including Vaisala™ non-dispersive infrared (NDIR) CO2 probes and electro-chemical Apogee™ O2 meters for flow-through gas analyses of soil gas using a Cole-Parmer™ vacuum-pressure pump. More than 1600 soil gas measurements have been made using these devices over more than 2 years of observations. Measurement accuracy of the FPGA appears very consistent compared with conventional bench-top gas chromatography and time series representations of paired CO2 and O2 measurement under hardwood forests at the CCZO indicate the ability to observe and track seasonal and climatic patterns and events with this technology. Further, the ability to analyze the apparent respiratory quotient, the ratio of CO2 production divided by O2 depletion relative to the aboveground atmosphere, indicates a high degree of sophisticated analyses are made possible with the FPGA platform. The high accuracy and reliability of the FPGA platform for soil gas monitoring allows for temporally extensive and spatially expansive studies of soil respiration.

With the development of the FPGA and other empirical analyses, plot-based field investigations were undertaken to determine how different critical zone measurements are able to quantify the vertical propagation of forest regeneration downward into soil profiles. The below-ground effects of 60-80 years of old-field forest succession in the CCZO were explored via chronosequence landuse history investigation. Chronosequence plots consist of reference hardwood forests, plowed agricultural fields, and old-field secondary pine forests. In this framework, reference hardwood soil profiles are minimally degraded in terms of erosion, soil structure, and soil biogeochemistry while currently cultivated agricultural plots are maximally impacted. Old-field secondary pine forests are considered to be intermediate and partially regenerated in terms of soil structure and function as reforestation has occurred and proceeded for decades, though the degree of regeneration was uncertain. Each landuse history comparison plot has been studied and soil structural regeneration of bulk density, macropores >0.075mm in diameter via X-ray Computed Tomography, and soil aggregate stability. Deeper monitoring of soil CO2 and O2 using FPGAs characterized belowground forest functioning down to 5m soil depth.

Hardwood forest soils have been observed to have higher CO2 concentrations and lower O¬2 below 2m soil depth, past the soil B-horizon, than either agricultural plots or old-field pine forests. Results indicate that while there has been a high degree of soil regeneration above the B-horizon in old-field secondary forest soils in terms of rooting, respiration dynamics, and soil structure, deep CZ processes below 2m remain significantly altered under old-field pine forests. This suggests that there may be a lag in below-ground regeneration relative to surficial soil regeneration. This appears to be due the hindering of root and macropore regeneration by a thick, low permeability, B-horizon. Abiotic CZ processes like storms which affected all treatments were also investigated as rapid declines in CO2 concentrations were observed deep in soil profiles during periods of intense precipitation. This is presumably due to CO2 dissolution and export into groundwater and indicates great potential to advance the fundamental understanding of the linkages between upland management and landcover, aerobic respiration, and deep critical zone processes like mineral weathering and the export of terrestrially-derived CO2 to streams.