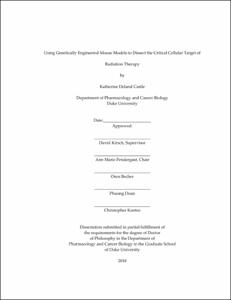 Approximately half of all cancer patients will receive radiation as part of their treatment regimen in either a palliative or curative setting. Conventionally, radiation therapy has been administered to patients in small 1.8-2 Gy daily fractions over the span of 1 to 2 months. However, advances in treatment planning and radiation delivery methods have enabled tumors to be irradiated with a small number of large radiation doses between 15 and 24 Gy. This innovative radiation delivery method has been employed for the treatment of various cancers, resulting in improved rates of local control. However, the mechanism mediating enhanced tumor eradication with high dose radiation therapy remains elusive. Some studies have suggested that the tumor vasculature is functionally damaged or destroyed following high doses of radiation, resulting in a second wave of tumor cell killing due to the depletion of nutrients. Other studies suggest that although high doses of radiation may disrupt the tumor vasculature, this phenotype is not a critical regulator of the enhanced rates of local control obtained with high dose radiation therapy. A better understanding of the mechanisms by which high radiation dose per fraction improves the efficacy of radiation therapy will help to develop strategies to improve patient outcomes.

To dissect the critical cellular target(s) of radiation therapy that regulates tumor response, we utilized genetically engineered mouse models of soft tissue sarcoma, non-small cell lung cancer, and brainstem glioma to manipulate the radiosensitivity of various cellular compartments. Dual recombinase technology enabled the deletion of the DNA damage response gene Atm in tumor endothelial cells. In primary sarcomas, radiosensitization of the tumor vasculature by disruption of ATM signaling resulted in improved tumor growth delay, but not rates of local control in response to radiation. The radiosensitization of endothelial cells did not improve tumor radiation responses in primary models of lung cancer and brainstem glioma. In stark contrast, deletion of Atm within the tumor parenchymal cells specifically resulted in improved radiation therapy outcomes in all three mouse models. Interestingly, loss of Atm was only able to improve tumor outcome after radiotherapy in brainstem gliomas lacking p53 which has potential significance for the translation of ATM inhibitors into the clinic. Together, these results identify tumor parenchymal cells, rather than endothelial cells, as the critical targets that promote tumor response to radiation therapy.