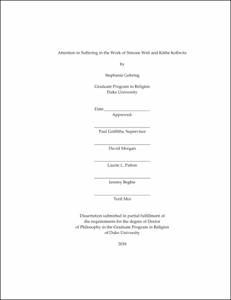 This dissertation traces the ethical and conceptual connections between Weil’s account of attention and Kollwitz’s artistic practice of attention, especially attention to suffering. Attention, in Weil’s view, is a strenuous surrender to things as they are, which involves the difficult work of letting those things be other than we desire (or even need) them to be. For both Weil and Kollwitz, attention is the only meaningful way of engaging human suffering, one’s own or that of others. My dissertation explores their ethically risky claim, and argues that attention is not only interesting or valuable but necessary when it comes to suffering: any genuine attempt to engage with suffering must begin with a discipline substantially similar to the one Weil writes about as attention and Kollwitz practices in her art. I show how Kollwitz visually extends Weil’s philosophy and theology of attention to suffering in two distinct ways: first, by attending in her art to her own suffering as well as the suffering of others; and second, by investing her art with a wholehearted and tactile focus on the human body.

For Weil, it is attention (as opposed to the will) that is at the heart of human agency. Meaningful action is, for her, impossible without attention. This means that actions intended to alleviate suffering cannot be effective unless they begin (and remain grounded) in attention. This is true especially because one of the effects of suffering (especially the extreme suffering Weil calls malheur, or affliction) is to disfigure the sufferer so much that she is no longer recognizable (even to herself) as a human being, and becomes invisible. Weil writes that attention, which is a form of love, is able to see sufferers even when suffering has made them invisible. Because attention is an exercise of the image of God in human beings, and is a participation in God’s work in the world, it can restore to those whom suffering has reduced to the status of objects a sense of their own human value and dignity. When it comes to our own suffering, the discipline of attention involves accepting it rather than attempting to evade it by passing it on to others. Weil argues that because of the way God entered into suffering in Christ’s incarnation and passion, the nature of suffering has changed: suffering is no longer empty, but is instead a place where we can meet God.

Kollwitz’s two first series of prints (A Weavers’ Revolt and Peasants’ War) show her drawing on many of the strands of modern art that surround her in pursuit of one central goal: to attend to human beings, and to help her viewers learn such attention through her work. The many states of her prints show the rigor of her revisions and the resonance between her artistic process and Weil’s account of attention. Over the course of her career, her aim of seeing humans accurately becomes more and more an aim to see those who suffer. On the one hand, Kollwitz turns toward the industrial poor among whom she lived, whose sufferings tended to make them invisible to others. On the other hand, she turns toward her own suffering, particularly her grief over the death of her son in WWI. In a late series of woodcuts called War, and in her bronze sculpture Mother with Dead Son, she connects the two. Both the print series and the sculpture serve as an invitation to hesitate in a way that lets us attend to the crushing and disorienting reality of suffering. I argue that the series War shows humans meeting their own exposure to the possibility of affliction, and that Kollwitz’s self-described calling “to voice the sufferings of people” fits into a theological account of lament, which presents human suffering in the context of God’s hearing and care.

My dissertation contributes to theological aesthetics by proposing attention as a generally commendable practice of perception, and by offering Weil and Kollwitz’s way of engaging with suffering as an alternative to theodicy.