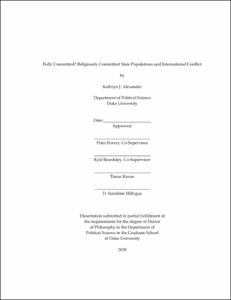 This dissertation project argues that high levels of religious commitment within a population-that is, high levels of importance attached to religious identities and ideas-can increase a state's propensity for initiating conflict. Following a three-article framework, the project contains three interlocking empirical studies, each speaking to religion's role in conditioning interstate conflict and connections between domestic culture and global politics.

Article 1, "Religiosity and Bellicosity: The Impact of Religious Commitment on Patterns of Interstate Conflict," explores whether states with religiously committed citizens are more likely to initiate conflict than states with less committed populations. The article builds upon findings within the literature on American politics that link individuals' levels of religious commitment to their attitudes about foreign policy, and tests whether the implications of these findings have cross-national applicability and explanatory power for interstate conflict. Using a novel, robust measure of the proportion of a state's population that is religiously committed, as well as monadic and dyadic statistical models, the analysis finds widespread connections between religious commitment and bellicose state behaviors. The results show that states with more religiously committed populations demonstrate higher propensities for initiating conflict with other states. This relationship is most severe when both states in a dyad have high levels of religious commitment, while it does not appear to be conditioned by whether majorities within the populations of each state ascribe to different religious traditions.

Article 2, "Sacred Bonds? Leaders, Religious Constituents, and Foreign Policy in Turkey," outlines a theory to more deeply analyze the empirical phenomenon identified in the first article, explaining why countries with religiously committed populations are likely to be prone to international conflict. The article builds the theory and then tests it on a case study of Recep Tayyip Erdoğan's tenure as prime minister and president of Turkey. The theory posits that in highly religious societies such as Turkey, leaders have incentives to compete for and maintain the support of their religious citizens when they perceive credible threats from domestic challengers. To effectively compete, leaders use religious signals to "outbid" their opponents and establish themselves as trustworthy champions of the faithful. As part of this process, leaders are incentivized to religiously outbid into the realm of foreign policy in pursuit of "rally-round-the-sacred-symbol" effects, and so will "spiritualize" foreign threats with religious framing. In framing foreign affairs as having implications beyond the material world, however, leaders find the domestic costs of backing down from addressing the threats particularly high and their audiences especially unforgiving of inaction. Ultimately, this increases the likelihood that leaders will follow through on combative rhetoric and results in higher overall likelihoods that they will initiate conflict. The case study leverages original field interviews and both Turkish and English-language resources to test and refine the mechanisms of the general theory.

Finally, Article 3, "Choose Your Words Faithfully: Religious Commitment, Elite Rhetoric, and the Formation of Individual Foreign Policy Opinion," takes a micro-level approach to the relationship between religious commitment and state foreign policy behaviors. The project focuses on why and how religious signals, like those identified in the macro theory of Article 2, may influence the foreign policy opinions of religiously committed people and elicit their support for a particular issue. Existing public opinion research in the United States has shown a connection between individuals' levels of religious commitment and their opinions about foreign affairs. However, relatively little is known about what drives this association, particularly when foreign policies do not have clear partisan stakeholders. The article posits that the relationship is at least partially attributable to how religiously committed people process elite cues about foreign policy issues, as they will most privilege the opinions of elites who use religious signaling. The results of an original survey experiment administered to a national sample of American adults tentatively support this argument, though the analysis suggests that not all religious signals are created equal. Religiously committed respondents show the greatest support for a foreign policy recommendation when it has been made using religious rhetoric, while a recommendation made by elites simply identified as being religious receives no more support-and often less-than one made by a non-religious group. The study contributes to our understanding of how members of the public develop foreign policy preferences in relation to their religious convictions and also helps to identify the audience for whom religious rhetoric may be an effective framing tool. The empirical evidence presented by the article contains a great deal of uncertainty, so these conclusions are ultimately preliminary, however, one final result about which there is no ambiguity-only consistent statistical significance-is that individual religious commitment matters for shaping foreign policy opinion, even in the absence of elite religious framing. Future research must therefore continue to grapple with explaining the significance of religious commitment to how individuals develop views on foreign policy.