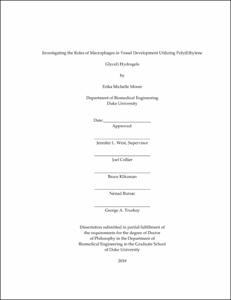 Overall, this dissertation demonstrates the role of macrophages in supporting vessel formation in PEG-based hydrogels. Findings in this thesis have helped to elucidate the diverging roles of macrophage phenotypes in supporting vascularization of PEG-based hydrogels. Moreover, this work has created PEG-based materials can be manipulated macrophage phenotype. This work highlights the usefulness of macrophages in vessel development and the usefulness of a macrophage-directing platform to enhance vascularization of tissue engineered constructs.