‘Christ the Redeemer Turns His Back on Us:’ Urban Black Struggle in Rio’s Baixada Fluminense 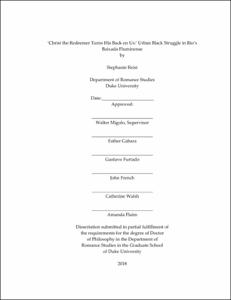 “Even Christ the Redeemer has turned his back to us” a young, Black female resident of the Baixada Fluminense told me. The 13 municipalities that make up this suburban periphery of Rio de Janeiro have suffered for decades from stigmatizing media narratives that cast the region as pathologically violent and culturally devoid due to its Blacker, poorer inhabitants. This has helped perpetuate government neglect, exacerbated by Rio’s hosting of the 2016 Olympic Games, through clientelist politics that thrive off the lack of jobs and basic public services in the region. My dissertation is an auto-ethnographic analysis of my three years of participatory action research with Black and brown youth in Rio de Janeiro’s stigmatized Baixada Fluminense. I argue that the music, films, social media driven journalism, and scholarly production of these youth contest the ways in which race, class, and place of origin often overlap through segregationist practices that attempt to maintain racial, socio-geographic hierarchies by relegating Black, brown, and poor bodies to the social and geographic periphery of a country than once proclaimed itself a “racial democracy.” Through transnational partnerships, these youth employ diasporic cultural forms and digital media to re-configure the Baixada and its 13 municipalities as a “Black place” that is inherently intersectional in its claims to collective access to urban and social mobility within this urban periphery.