Essays on Macroeconomics and Labor Markets 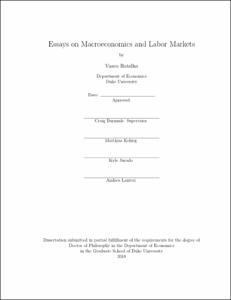 This dissertation consists of three essays. In the first essay, ``The Structural Shift in the Cyclicality of the U.S. Labor Income Share: Empirical Evidence'', I document a structural shift in the cyclicality of the labor share from countercyclical to procyclical. I conclude that this structural shift is due to a decline in the usage of labor hoarding at the firm level and to an increase in the volatility of real wages. I also provide evidence suggesting this shift is widespread to the entire economy and is not due to structural changes in the industrial composition for the U.S. economy. In the second essay, ``The Cyclicality of the Labor Share: Labor Hoarding, Risk Aversion and Real Wage Rigidities'', I explore whether the decline in the usage of labor hoarding is able to jointly generate the vanishing procyclicality of labor productivity and the shift in the cyclicality of the labor share. I conclude that while these models are able to generate the vanishing procyclicality of labor productivity, they will generate counterfactually a more countercyclical labor share. This counterfactual result also occurs when I consider instead a decline in the workers' bargaining power in the wage bargaining power and an increase in the relative importance of aggregate demand shocks. In the third essay, ``The Public Sector Wage Premium: An Occupational Approach'', I characterize the strategy undertaken by the U.S. government to provide insurance to workers in occupations that are on the left-tail of the private wage distribution. I conclude that the government is effectively offering a high wage premium to non-routine manual workers and a wage penalty to non-routine cognitive workers.