Current Status and Trends of Early Childhood Nutritional Status and Dietary Intake in China: Evidence from the Chinese Health and Nutrition Survey 2000-2011 and Stakeholder Interviews 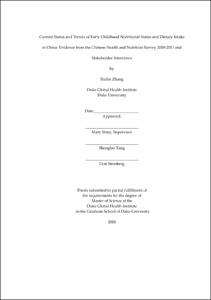 Background: Appropriate nutrition during early life is essential for optimal growth and development. China has seen a drastic improvement in child nutrition over the past few decades with decreased rates of stunting, wasting and undernutrition. However, there are wide gaps in the nutritional status of young children and preschoolers in rural and urban areas, which is a major public health concern. Currently, there is limited understanding about dietary intake of young children and the rural-urban gap in China, especially in the years after 2000. Therefore, the aims of this study were to examine trends in dietary intake of children at 2-6 years of age using data from the Chinese Health and Nutrition Surveys (CHNS) collected in 2000, 2004, 2006, 2009 and 2011 and to conduct interviews from key stakeholders in China to gather their perspectives and insights regarding child nutrition improvement in China.

Methods: Data obtained from the China National Nutrition and Health Survey (CNNHS) and Global Burden of Diseases, Injuries, and Risk Factors (GBD) database were used to describe the trend of child nutritional status in last 20 years from 1992 to 2016. Anthropometric nutritional indicators including stunting, wasting, underweight, overweight and obesity were presented in bar graphs and tables.

In-depth interviews were conducted with 23 stakeholders whose work involved child nutrition at national levels, as well as two provinces in Yunnan and Hubei. The interviews addressed topics about the changes and the current status of child undernutrition, as well as major tasks for child nutrition improvement. The qualitative analysis for the in-depth-interviews consisted of thematic analysis. The interviews were conducted in Mandarin. Coding and charting were processed in Chinese text using MAXQDA version 12. The final thematic framework and insightful quotations were translated into English.

Results: Impressive declines were reported in the prevalence of child stunting (35.8% to 8.1%), underweight (19.8% to 3.2%) and wasting (3.7% to 2.4%) from 1992 to 2012 in China, while an upward trend of overweight (6.5% to 8.4%) and obesity (2.7% to 3.3%) was observed in children under 6 years old from 2002 to 2012 in the CNNHS database. Most interview respondents expressed concerns about the increasing prevalence of childhood obesity, and the urgency of action for alleviating undernutrition among children living in poverty-stricken areas. The interview respondents from the child nutrition-related governmental departments in Hubei and Yunnan province stressed the necessity of enlarging the scale of the coverage of governmental child nutrition improvement programs in poverty-stricken rural areas. The average energy and macronutrients intake of children 2-6 years of age in the CHNS increased from 2000 to 2009 with a slight decrease in 2011. Among both rural and urban children, the percent energy from fat increased from 2000 to 2011 and exceeded 30% of energy intake. In general, the percentage of these children who consumed vegetables, meat and protein from fish and eggs, and dairy products increased from 2004-2011, and significant dietary intake disparities of protein source foods, such as dairy products were observed between rural and urban areas (p < 0.05) with lower intakes among children in rural areas.

Conclusions: From the years 2000 to 2011, the nutritional status and diet quality among urban and rural young children in China has undergone significant improvement. Also, young children in China are undergoing a remarkable nutrition transition characterized by a high energy intake from fat and low energy intake from carbohydrates. Both urban and rural children are facing the threat brought about by this nutrition transition, and this may lead to the increasing burden of child overweight. Further, dietary disparities still exist. Governmental commitment should be devoted to helping vulnerable, marginalized populations living in poor rural areas in China to further reduce undernutrition, and strategic action targeted at reducing childhood overweight should be taken to control the increasing trend in obesity in both rural and urban areas.