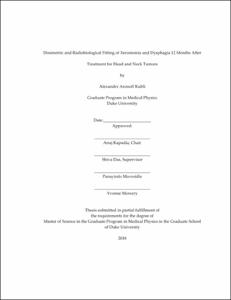 Oropharyngeal Squamous Cell Carcinoma (OPSCC) is by far the most predominant form of head and neck cancer in the United States. The survival rate for OPSCC is very high, which, while fortunate, yields many patients who are left with the late term toxicities consequent of their treatment. This project aimed to use patient-reported outcome (PRO) data from two sources – the PRO-CTCAE and the QLQ-C30 – along with the dosimetric data of patients that have already been treated, in order to characterize retrospectively a relationship between patient dosimetric data and the severity of response of PRO data. In particular, PRO data was used as a way to characterize the severity of patient-experienced xerostomia and dysphagia. Additionally, this data was used to fit the radiobiological parameters for two normal tissue complication probability (NTCP) models: the Lyman-Kutcher-Burman (LKB) model, and the Relative Seriality (RS) model. Overall, it was found that the PRO-CTCAE data was more robust than the QLQ-C30 data in its characterization. Based on the PRO-CTCAE data, the V52 (volume which receives at least 52 Gy) of the combined constrictors and the V59 of the superior pharyngeal constrictor show the strongest relationship with patient-reported dysphagia. Additionally, the V27 of the contralaterals and the V12 of the contralateral parotid show the strongest relationship with patient-reported xerostomia. Furthermore, it was found that the dose response curves for both NTCP models fit the data with similar accuracy.