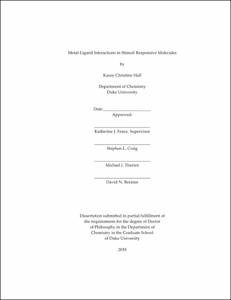 Molecules respond to a range of stimuli, including force and light. Force is an interesting stimulus because it is ubiquitous. It is typically considered destructive, but molecules have been designed to respond to mechanical force to produce constructive chemistries. While much progress has been made towards understanding the role of mechanical forces in accelerating and directing covalent chemical reactivity, the behavior of coordinative complexes subjected to the same is far less understood. This work describes the design and synthesis of novel metallomechanophore constructs intimately connected with polymer chains suitable for testing by single molecule force spectroscopy (SMFS) to probe the effect mechanical forces on the behavior of coordination complexes. Efforts towards characterizing the behavior of these metallopolymers upon application of force by (SMFS) are described. Further, preliminary data on expanding the toolbox of stimuli-responsive molecules by incorporating various metals and higher denticity ligands into these polymer constructs using newly established design principles are discussed. These results create a roadmap for accessing strained metal complexes with the goal of enabling the unique physical and chemical properties of metal ions to be leveraged for creating novel materials.

Alternatively, light can be harnessed as a stimulus. Light allows for precise control over a molecule’s response since these molecules can be design to respond to an exact wavelength of light. The range of applications for light-responsive is diverse, and the ability to design photoswitches with variable photochemical and physical properties is consequently important for realizing their potential. Addition of metals adds an additional level of control that allows for the creation of increasingly sophisticated responsive molecules. Work in our lab has reported on the photochromism of (E)-N'-(1-(2-hydroxyphenyl)ethylidene)isonicotinohydrazide (HAPI), a chelating aroylhydrazone. Building upon this, we report the synthesis of structurally related aroylhydrazone chelators, and conducted a structure-activity study to explore the effect the modifications on their photoreactivity, photostationary state composition, photoisomer thermal stability, and relative iron(III) binding ability.

Organometallics provide opportunities for greater tunability and reactivity compared to organic molecules. This work demonstrates the utility of incorporating metals into stimuli responsive molecules, and provides a framework for the design of future force- and light- responsive metal complexes.