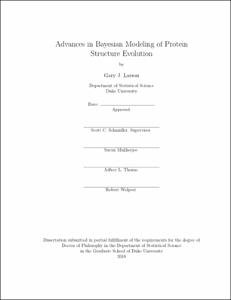 This thesis contributes to a statistical modeling framework for protein sequence and structure evolution. An existing Bayesian model for protein structure evolution is extended in two unique ways. Each of these model extensions addresses an important limitation which has not yet been satisfactorily addressed in the wider literature. These extensions are followed by work regarding inherent statistical bias in models for sequence evolution.

Most available models for protein structure evolution do not model interdependence between the backbone sites of the protein, yet the assumption that the sites evolve independently is known to be false. I argue that ignoring such dependence leads to biased estimation of evolutionary distance between proteins. To mitigate this bias, I express an existing Bayesian model in a generalized form and introduce site-dependence via the generalized model. In the process, I show that the effect of protein structure information on the measure of evolutionary distance can be suppressed by the model formulation, and I further modify the model to help mitigate this problem. In addition to the statistical model itself, I provide computational details and computer code. I modify a well-known bioinformatics algorithm in order to preserve efficient computation under this model. The modified algorithm can be easily understood and used by practitioners familiar with the original algorithm. My approach to modeling dependence is computationally tractable and interpretable with little additional computational burden over the model on which it is based.

Finally, I present work related to the study of bias in site-independent models for sequence evolution. In the case of binary sequences, I discuss strategies for theoretical proof of bias and provide various details to that end, including detailing efforts undertaken to produce a site-dependent sequence model with similar properties to the site-dependent structural model introduced in an earlier chapter. I highlight the challenges of theoretical proof for this bias and include miscellaneous related work of general interest to researchers studying dependent sequence models.