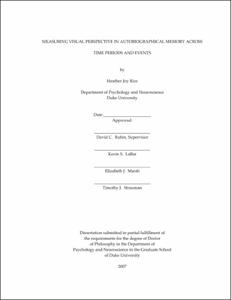 View / Download
2.2 Mb
Date
Author
Rice, Heather Joy
Advisors
Rubin, David C.
LaBar, Kevin S.
Marsh, Elizabeth J.
Strauman, Timothy J.
Repository Usage Stats
555
views
769
downloads
Abstract
Visual perspective in the context of autobiographical memory research refers to the point of view from which an individual constructs a visual image of a past event. While the number of studies focusing on this phenomenological aspect of retrieval has increased in the last decade, a basic understanding of the meaning of perspective and its fundamental characteristics has not been fully established. The current studies attempt to further this understanding. The first series of studies examine the role of memory age in perspective using continuous scales to measure self-reported perspective. These studies show memories change in a linear fashion, from first- to third-person perspective, as memories become more remote. Furthermore, individuals report more than one perspective during a single retrieval episode, females report more third-person perspective than do males, and individual differences in perspective use were observed. These individual differences were not accounted for by personality differences, such as levels of public self-consciousness. A second series of studies asked participants to describe the location of their visual perspective, rather than using continuous scales. These studies show visual perspective location varies greatly and consistently across space and for different events. For example, memories of giving a presentation were more likely to be visualized from in front of the individual, whereas memories of running from a threat were visualized from behind the individual. Although perspective location varies across events and space, location did not affect other phenomenological aspects of retrieval, such as memory vividness, belief in the accuracy of one's memory, or the degree of reliving experienced, nor did location map onto the ideal location for watching an event unfold or for watching one's self complete a task. Together these studies further characterize visual perspective during retrieval, suggesting it is more complex than a simple, dichotomous distinction between first- and third-person perspective. Additionally, they highlight the importance of understanding the phenomenological experience of perspective in order to appreciate its significance in other domains.
Type
Dissertation
Department
Psychology and Neuroscience
Subject
autobiographical memory
perspective
visual imagery
Permalink
https://hdl.handle.net/10161/179
Citation
Rice, Heather Joy (2007). Measuring Visual Perspective in Autobiographical Memory Across Time Periods and Events. Dissertation, Duke University. Retrieved from https://hdl.handle.net/10161/179.
Collections
More Info
Show full item record