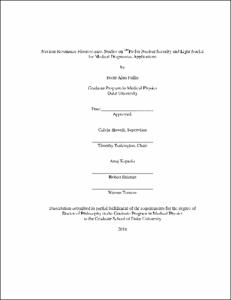 Nuclear resonance fluorescence (NRF) is a highly sensitive technique for measuring the energies and strengths of dipole excitations in nuclei. For incident photon energies below the particle separation threshold, excited nuclear states decay solely through gamma-ray emission, providing a unique de-excitation energy spectrum corresponding to the differences in energy between excited and final states. When excitation cross sections and transition energies are known, the presence (or absence) of a particular isotope within a sample can be determined and quantified. This dissertation describes the use of the NRF technique in two separate areas of active research: nuclear security and medical diagnostics.

In recent years, the nuclear security community has been seeking to develop new photon-beam based technologies for screening cargo for contraband and special nuclear materials (SNM), especially weapons grade material. However, because the current knowledge of dipole excitations in the actinides is highly limited, much greater study of the energy and strengths of dipole excitations in these isotopes is required, with particular focus on isotopes of uranium and plutonium. Nuclear resonance fluorescence studies using mono-energetic gamma-ray beams have previously been conducted at the High Intensity Gamma-Ray Source (HIS) facility at Triangle Universities Nuclear Laboratory (TUNL) on 235U [Kwa11], 238U [Ham12], and 232Th [Ade11]. Additionally, bremsstrahlung surveys below 3 MeV have been conducted at the Massachusetts Institute of Technology’s High Voltage Research Laboratory, examining dipole excited states in 239Pu [Joh07, Ber08] and 240Pu [Qui12].

The first portion of this dissertation provides details of our high-sensitivity measurements of the distribution of dipole excited states observed in 240Pu between 2–3 MeV using the linearly-polarized, quasi-monoenergetic photon beam at the HIS. Measurements were taken at eleven mean beam energies ranging from 1.95 to 2.95 MeV (in 100-keV steps). The target material was powdered plutonium oxide containing 4.65(8) g of 240Pu. Gamma rays corresponding to transitions between excited states in 240Pu were observed using high-purity germanium (HPGe) detectors. The narrow energy resolution of the HIS beam (e.g., E/E ~4% FWHM achieved using a 0.75" lead collimator) greatly reduced background from Compton scattering off the high-Z target material compared to bremsstrahlung measurements, improving the signal-to-noise ratio (SNR) of observed transitions and allowing the observation of low-intensity transitions that would otherwise be below detection threshold. The linear polarization of the HIS beam also allowed the determination of the parity of excited states based on differences in the polar and azimuthal angular distribution of the gamma rays emitted by the target. For each observed transition, the transition energy, partial integrated cross section, partial level width, and reduced transition probability for de-excitation were determined. The excitation energy, spin, parity, total integrated cross section, total level width, reduced transition probability for excitation, and ratio of the reduced transition probabilities (Rexp) were determined for each excited state. A total of 27 discrete transitions were observed from 14 excited states, of which 10 transitions were observed for the first time in the present experiments. Cross sections measured for ground-state decay were higher on average than those previously measured by Quiter et al., while those for 1st excited state decays were largely consistent with the prior measurements. All ground-state transitions were determined to be M1 in character.

The second portion of this dissertation involves measurements made to determine the feasibility of applying the NRF technique to medical diagnostics. Nuclear resonance fluorescence is a potentially valuable new tool for aiding in the diagnosis of medical conditions which cause the natural abundances of elements in the body to be altered. Evidence has been found for statistically significant asymmetries in certain trace element concentrations between healthy (benign) and malignant (cancerous) breast tissue. One of the elements for which a strong (> factor 2) asymmetry has been found is calcium [Riz84, Ng97, Raj06, Sil12]. A likely source of this asymmetry is differences in the calcium concentrations between the two principle forms of calcium containing minerals that comprise breast calcifications, calcium oxalate and calcium phosphate [Hak02]. Calcium oxalate (Type 1) calcifications generally occur in the form of calcium oxalate dihydrate (CaC2O4•2(H2O)) (also called Weddellite) and have been found to always be associated with benign breast tissue. Calcium phosphate (Type 2) calcifications in breast tissue are primarily composed of hydroxylapatite (Ca5(PO4)3(OH)) and are highly associated with malignancy [Win93, Sco17]. While the density of hydroxyapatite containing lesions is typically greater than calcium oxalate, it is not always possible to distinguish them with traditional mammography. A secondary procedure that could determine the isotopic composition of a calcification would be of benefit in reducing the number of biopsies to which patients are subjected.

For the second part of the experiment, three cylindrical PRESAGE® radiochromic dosimeters, containing either calcium oxide or calcium hydroxylapatite targets were irradiated with the photon beam at the HIS targeting the same transitions in calcium and phosphorus as during the bulk measurements. The goal of these measurements was to determine the ability to distinguish between calcium oxalate and hydroxylapatite calcifications contained in a tissue-simulating medium as well as to determine the corresponding detection limits for calcium and phosphorus. PRESAGE® material was chosen due to its ability to provide 3D depth-dose information as well as effectively mimicking the photon scattering properties of human tissue. The dosimeters were irradiated for sufficient time so as obtain a dose of several grays (Gy) or higher in regions of interest in order to provide a strong signal for post-irradiation optical scanning. Experimentally measured depth-dose curves were then compared to simulated values. The two calcium compounds contained in the PRESAGE® material were able to be clearly distinguished via the strong counting asymmetry observed. The best detection limit for calcium achieved was 99.0(15)(49) mg/cm2 using a single HPGe detector and 73.5(8)(36) mg/cm2 for two HPGe detectors. Likewise, a minimum detection limit (MDL) for phosphorus of 45.6(5)(20) mg/cm2 was achieved using a single HPGe detector and 34.8(3)(15) mg/cm2 for two HPGe detectors. These MDLs were determined to be sufficient for detection of 1 mm hydroxylapatite calcifications in tissue by both calcium and phosphorus detection. The corresponding doses to tissue for photon beams that will likely be available in the near future (e.g., 0.1% FWHM energy resolution) are too high for consideration of NRF-based breast screening in the near term. Minimum detection limits will have to be lowered further and detector system efficiencies increased substantially before in vivo diagnostics becomes viable.