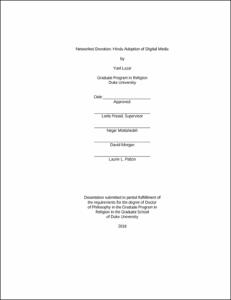 Digital media prevail, determine, and shape contemporary lives and experiences, serving as an all-encompassing cultural system. Shaping modes of production and reception, digital media’s publics are networked to the media’s content and to each other in unique ways. Contemporary religions writ large, and Hinduism in specific, cannot escape the dominant digital culture and must negotiate their participation in it. Hindu devotion utilizes and permeates digital networks in various forms, and the number of websites and mobile applications offering Hindu content and services is constantly increasing. This study tells the story of a growing population of Hindu devotees who live and work as part of global digital and cultural networks, wishing to adjust their religious praxis to their larger lifestyle by incorporating digital technologies and networks into their devotion. Through the case studies discussed here, devotees can be in the presence of their chosen deity, visit temples digitally, order devotional items to be delivered globally, perform domestic rituals with priests they book online, and be in an intimate relationship with their guru. Vedic Vaani, Where’s My Pandit, and iBhakti are Hindu startups led by young entrepreneurs who wish to facilitate Hindu devotion for a networked public, of which they are part. Shree Siddhivinayak Temple in Mumbai and Sri Nage Sai Temple in Coimbatore showcase Hindu temples’ utilization of digitally networked media through two very different journeys. Lastly, Sadhguru and his Isha Foundation master various digital platforms, forming and maintaining an intimate guru-disciple relationship in digital means.

Focusing on the emerging landscape of digital Hinduism, the aim of this project is to explore how devotion is dispersed, re-situated, reinterpreted, and made public via digitally networked media, and to unveil the intricate web of disparate-but-interrelated actors, which promote the use and assimilation of digital media to Hindu devotion. In order to apprehend the various apparatuses, histories, and cultures that are entangled in this process, this project draws together interdisciplinary theoretical tools and online and offline ethnographic experiences. Tracing digital Hindu networks, and considering Hinduism in itself as a network of networks, this project highlights the ways in which digital Hinduism is integrated into a Hindu Wide Web, which connects Hindu authorities, publics, commercial entities, new technologies, and the divine. Reflecting on the specificities of the digital cultural system in which we operate, this study examines how core notions of Hindu devotion shift with and through digital media, suggesting that digital networks do not stand in the way of devotion. There is no attempt to replace traditional devotional practice, but, nonetheless, contemporary technoculture generates new ways to fulfill Hindu devotion, shifting the core notions on which it is based. In that, this study emphasizes the need to rethink—in the digital age—fundamental ideas such as intimacy, agency, presence, authority, and authenticity as critical to understanding our contemporary networked mode of being in the world.