"The Blue Devil Resistome": Antibiotic Resistance Transfer from the Environment to the Lab at Duke University 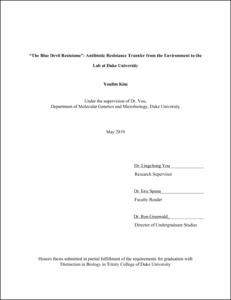 View / Download
940.4 Kb
Date
Author
Kim, Youlim
Advisor
You, Lingchong
Repository Usage Stats
228
views
66
downloads
Abstract
It is well observed that bacteria are becoming increasingly resistant to existing antibiotics worldwide. Horizontal gene transfer (HGT), more specifically, conjugation is one of the mechanisms by which bacteria gain antibiotic resistance. From 2017 to 2018, a project run by the You lab at Duke University collected bacterial samples from multiple areas on Duke’s East and West campuses in an effort to map out a microbiome of the university. Environmental isolates that tested positive for antibiotic resistance were found, but studies have not been done to determine if these isolates could pose potential health threats to humans. By exposing the bacterial isolates to a series of antibiotic tests and measuring their growth, this project found that the conjugation of antibiotic resistance genes from environmental isolates to lab strains of Escherichia coli can occur. In addition, certain locations, like a door handle to a lab hallway door, expressed higher incidences of HGT capable bacteria than other locations. The ability of these isolates to transfer their resistance genes to lab strains would indicate a potential danger to the Duke population, as existing non-resistant pathogens could take on resistance to antibiotic treatments. In the future, understanding the mechanisms behind what drives these observations allows for the creation of better methods of combating antibiotic resistance and its spread.
Type
Honors thesis
Department
Biology
Subject
Antibiotic Resistance
Horizontal Gene Transfer
Microbiology
Microbiome
Permalink
https://hdl.handle.net/10161/18376
Citation
Kim, Youlim (2019). "The Blue Devil Resistome": Antibiotic Resistance Transfer from the Environment to the Lab at Duke University. Honors thesis, Duke University. Retrieved from https://hdl.handle.net/10161/18376.
Collections
More Info
Show full item record