The Ethics of the Rule of Rescue: Guidelines for Use in the Medical Setting 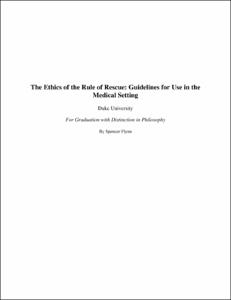 View / Download
529.5 Kb
Date
Author
Flynn, Spencer
Advisors
Rosoff, Philip
Hawkins, Jennifer
Repository Usage Stats
84
views
199
downloads
Abstract
The “rule of rescue” (RR) is the human impulse to rescue an identifiable person facing imminent threat, regardless of associated costs. For example, no price is spared to save trapped miners, even though instituting improved mine safety protocols may be more cost-effective by preventing mine disasters in the first place. In healthcare institutions, the rule of rescue is controversial primarily because of the frequent conflict between the impulse to rescue versus cost-effective healthcare allocation, and secondarily because of the occasional conflict between the impulse to rescue versus fairness and equity concerns. Consider the issue of allocating ventilators in a flu pandemic—in the face of scarcity, should we attempt to rescue each victim as they come, or adhere to a cost-effectiveness scheme in distributing resources? Further, should we attempt to rescue each victim as they come if wealthy, insured patients disproportionately present for help, or should we enact more generalized policies to ensure fair outcomes at a population level? Here, I present the first full ethical treatment of the RR, including an analysis of the moral psychology of rescue and the RR as considered from both consequentialist and deontological lenses. Regarding psychology at the individual level, I conclude that the impulse to rescue does not track morally salient considerations, but instead is influenced primarily by heuristics and errors in processing statistics. At a societal level, I conclude that following the RR plays an important role in building social trust and motivating altruism. Further, I show that the RR is compatible with each major ethical theory, albeit only insofar as it is necessary for social cohesion and wellbeing. I end by presenting a summary checklist of the relevant considerations around employing the RR in healthcare institutional decision-making, as well as a few suggestions for future research programs.
Type
Honors thesis
Department
Philosophy
Subject
ethics
bioethics
healthcare
resource allocation
moral psychology
applied ethics
Permalink
https://hdl.handle.net/10161/18409
Citation
Flynn, Spencer (2019). The Ethics of the Rule of Rescue: Guidelines for Use in the Medical Setting. Honors thesis, Duke University. Retrieved from https://hdl.handle.net/10161/18409.
Collections
More Info
Show full item record