Bird is the Word: An Assessment of Donald Trump’s Language Use on Twitter in Relation to His Public Opinion Ratings in the 2016 Presidential Election 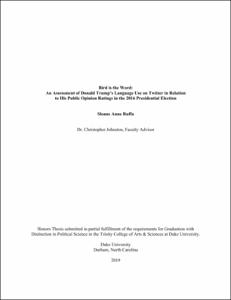 View / Download
291.8 Kb
Date
Author
Ruffa, Sloane
Advisor
Johnston, Christopher
Repository Usage Stats
260
views
247
downloads
Abstract
The upset victory of Donald Trump in the 2016 presidential election caused many political scientists to theorize how and why this occurred. Literature regarding this election is particularly interesting in the political psychology field, which assesses Trump’s victory as a result of employing calculated, psychologically-charged language and in his communication style that resonated with voters. Trump’s campaign also featured a great use of social media, namely Twitter, in communicating directly with his base. This study analyzes Trump’s tweets from his nomination at the Republican National Convention on July 19, 2016 through the day before the 2016 presidential election on November 7, 2016. This study specifically focuses on Trump’s uses of psychologically-charged language in his tweets in conjunction with his favorability ratings over this time period. Based on the stored dictionary in the LIWC software, LIWC was utilized to analyze Trump’s Twitter text and code for his use of language indicative of clout, anger, anxiety, positive emotion, negative emotion, focus on the past, focus on the present, and focus on the future. After running three time-series regressions using these independent variables and collapsing the data on a daily basis, we are able to better understand the relationship between Trump’s use of particular language on Twitter and his favorability ratings among the public. Model 2 yielded statistically significant results for positive emotion language at a p-value of 0.05 and anger was statistically significant at a p-value of 0.1. Although two of the models’ variables did not yield any statistically significant results, we are still able to assess slight relationships between the particular language variables and Trump’s favorability rating. The lack of many statistically significant results also casts doubt on many theories regarding results of the 2016 presidential election and has implications for the 2020 presidential election.
Type
Honors thesis
Department
Political Science
Subject
2016 presidential election, Donald Trump, Twitter, LIWC, psychologically-charged language variables
Permalink
https://hdl.handle.net/10161/18451
Citation
Ruffa, Sloane (2019). Bird is the Word: An Assessment of Donald Trump’s Language Use on Twitter in Relation to His Public Opinion Ratings in the 2016 Presidential Election. Honors thesis, Duke University. Retrieved from https://hdl.handle.net/10161/18451.
Collections
More Info
Show full item record