Developmental Regulation in Response to Nutritional Status in Caenorhabditis elegans 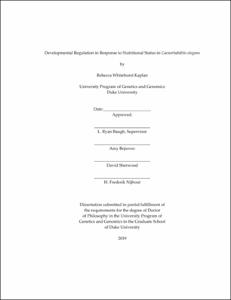 Developmental physiology is very sensitive to nutrient availability. For instance, in the nematode C. elegans, newly hatched L1-stage larvae require food to initiate postembryonic development. Despite the essential role of food in C. elegans development, the contribution of food perception versus ingestion on physiology has not been delineated. We used a pharmacological approach to uncouple the effects of food (bacteria) perception and ingestion in C. elegans. Perception was not sufficient to promote postembryonic development in L1-stage larvae. However, L1 larvae exposed to food without ingestion failed to develop upon return to normal culture conditions, instead displaying an irreversible arrest phenotype. Inhibition of gene expression during perception rescued subsequent development, demonstrating that the response to perception without feeding is deleterious. Perception altered DAF-16/FOXO subcellular localization, reflecting activation of insulin/IGF signaling (IIS). However, genetic manipulation of IIS did not modify the irreversible arrest phenotype caused by food perception, revealing that wild-type function of the IIS pathway is not required to produce this phenotype and that other pathways affected by perception of food in the absence of its ingestion are likely to be involved. Gene expression and Nile red staining showed that food perception could alter lipid metabolism and storage. We found that starved larvae sense environmental polypeptides, with similar molecular and developmental effects as perception of bacteria. We conclude that actual ingestion of food is required to initiate postembryonic development in C. elegans. We also conclude that polypeptides are perceived as a food-associated cue in this and likely other animals, initiating a signaling and gene regulatory cascade that alters metabolism in anticipation of feeding and development, but that this response is detrimental if feeding does not occur.

The C. elegans insulin-like signaling network supports homeostasis and developmental plasticity. The genome encodes 40 insulin-like peptides and one known receptor. Feedback regulation has been reported, but the extent of feedback and its effect on signaling dynamics in response to changes in nutrient availability has not been determined. We measured mRNA expression for each insulin-like peptide, the receptor daf-2, components of the PI3K pathway, and its transcriptional effectors daf-16/FOXO and skn-1/Nrf at high temporal resolution during transition from a starved, quiescent state to a fed, growing state in wild type and mutants affecting daf-2/InsR and daf-16/FOXO. We also analyzed the effect of temperature on insulin-like gene expression. We found that most PI3K pathway components and insulin-like peptides are affected by signaling activity, revealing pervasive positive and negative feedback regulation at intra- and inter-cellular levels. Reporter gene analysis demonstrated that the daf-2/InsR agonist daf-28 positively regulates its own transcription and that the putative agonist ins-6 cross-regulates DAF-28 protein expression through feedback. Our results show that positive and negative feedback regulation of insulin-like signaling is widespread, giving rise to an organismal FOXO-to-FOXO signaling network that supports homeostasis during fluctuations in nutrient availability.