Monumentalizing Infrastructure: Claudius and the City and People of Rome 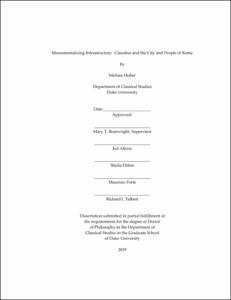 “Monumentalizing Infrastructure: Claudius and the City and People of Rome” is a comprehensive study of public infrastructure in Rome under the emperor Claudius (41-54 CE). Recent scholarship has targeted Claudius’ reign as an important moment in the development of the Roman Principate. Overshadowed in the scholarship by Augustus’ transformation of Rome from a city of brick to marble, Claudius’ projects centered on providing protection from floods, fires, and diseases, and assuring the availability of enough clean water, food, and means of transportation. Building a large marble temple certainly made a symbolic and aesthetic impact, but nearly doubling Rome’s water supply must have meant more to the common person living day-to-day in the city. By focusing on Claudian infrastructure initiatives and using GIS to map and contextualize this work, this dissertation interrogates traditional scholarly approaches to Roman imperial building and ancient urban planning.

Following a survey of the ancient sources for Claudian building in Rome in Chapter 1, Chapter 2 examines the practical measures put in place to secure and advertise the steady supply of affordable grain to the city. Many have explored the convoluted history of the grain supply in Rome. I do not replicate such studies, whose findings have not been changed by any significant new discoveries, but instead I focus on how the labors put in to improve and advertise such improvements to the food supply of Rome under Claudius changed and shaped the urban landscape.

Chapter 3 centers on water and its distribution in the city. I use archaeological, epigraphic, and literary evidence to assess Claudius’ effects on Rome’s water supply. Visualizing these changes lets us consider building as a process, and see what disruption, repair, and construction of aqueduct lines did to water distribution to particular regions of the city. The maps suggest that Claudius improved the potable water supply in areas where the poorer population of Rome lived.

Chapter 4 addresses boundary marking and road building—the visual and practical changes made to the organization of and movement in the city. Organizing the boundaries into and out of the city facilitated the urban development of areas along the banks of the Tiber river. The visualization in this and other chapters allow us to see much more clearly than before, and emperor’s impact upon the general populace and obtain a clearer picture of the city’s urban history.

My compilation and analysis of the evidence reveals a thorough revision of Rome’s infrastructure under Claudius, despite his common denigration as an ineffectual buffoon or a puppet of his wives and freedmen. This dissertation provides a new framework for examining imperial building in Rome. The infrastructure projects that made all other construction possible are at the forefront. The negative aspects of Claudius’ character portrayed in the literary sources are counterbalanced or at least nuanced when a focus on infrastructure and care for the people provides a different viewpoint. An emperor’s popularity and legacy among the people would not be measured by jealous quarrels among the aristocracy. The imperial government was not merely reacting to crises, rather it was proactively seeking long-term solutions.