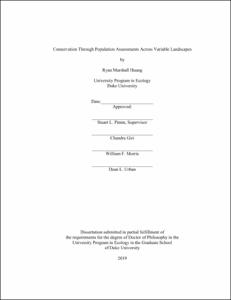 Few areas of the planet are untouched by human actions, be they marine or terrestrial. Marine habitats face disturbance from overexploitation of fisheries and pollution while terrestrial habitats face significant threat from land cover conversion and degradation. To address these threats, conservationists utilize a variety of population viability analyses to both assess and manage species’ health. The results of these analyses often play a key role in determining when intervention is necessary and which actions will be the most successful. Within this dissertation, I used several population modeling approaches to advance our understanding of changes in the landscape on the persistence of populations and by extension, species.

This dissertation may be broadly divided into two halves, the first assessing a single, local population and the second evaluating metapopulations. In Chapter 2, I combined telemetry data on sooty terns (Onychoprion fuscatus) with a long-term capture-mark-recapture dataset from the Dry Tortugas National Park to map the movements at sea for this species, calculate estimates of mortality, and investigate the impact of hurricanes on a migratory seabird. Included in the latter analysis is information on the locations of recovered bands from deceased individuals wrecked by tropical storms. I present the first known map of sooty tern migration in the Atlantic Ocean. The results indicate that the birds had minor overlaps with areas affected by the major 2010 oil spill and a major shrimp fishery. Indices of hurricane strength and occurrence are positively correlated with annual mortality and indices of numbers of wrecked birds. As climate change may lead to an increase in severity and frequency of major hurricanes, this may pose a long-term problem for this colony.

Mangroves provide an ideal, model landscape for my analysis in Chapter 3. Of conservation concern, one can easily delineate their patch boundaries. I calculated metapopulation capacity for 99 metapopulations from 32 different mangrove-endemic bird species globally in the years 2000 and 2015. Northern Australia and South East Asia have the highest richness of mangrove-endemic birds, with some hotspots also occurring in Guyana and French Guiana. The areas with the highest metapopulation loss are the Caribbean, the Pacific coast of Central America, Madagascar, Borneo, and isolated patches in Southeast Asia in Burma and Malaysia. Regions with the highest loss of habitat area are not necessarily those with the highest loss of metapopulation capacity. Often it is not a matter of how much, but how the habitat is lost since fragmentation of patches has a complicated relationship with extinction risk.

After analyzing the effects of habitat loss and fragmentation on a species’ risk of extinction, it is natural to examine the reverse, the restoration of habitat. In Chapter 4, I used metapopulation models to prioritize locations for potential habitat corridors. I compared these results to standard connectivity models that have grown in popularity to illustrate how together they provide a more complete set of recommendations for the recovery of species. For this chapter, I use the golden lion tamarin (Leontopithecus rosalia) as the focal species. Endemic to the highly fragmented Atlantic coastal forest of Brazil, the golden lion tamarins are a highly studied species of top conservation concern. I identified the best locations for habitat restoration to increase metapopulation capacity and how they compare with movement of individuals in the current landscape. I also evaluated how a previous corridor restoration ranked according to these methods and how it effects future conservation planning. While large, occupied patches are significant for both sets of models, metapopulation models also indicate the importance of nearby, medium-sized empty patches that if connected by a corridor would facilitate the growth and recovery of tamarin populations.

In summary, I applied a suite of population modeling techniques to an assortment of landscapes and species for conserving biodiversity. Despite the variety of models used, I illustrate the flexibility and utility of population ecology to conservation management.