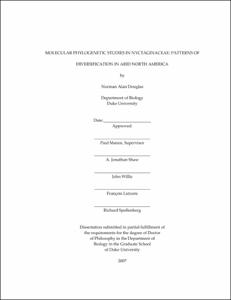 View / Download
2.5 Mb
Date
Author
Douglas, Norman Alan
Advisors
Manos, Paul Steven
Shaw, A. Jonathan (Arthur Jonathan)
Willis, John
Lutzoni, François M., 1959-
Spellenberg, Richard
Repository Usage Stats
448
views
1,922
downloads
Abstract
The Four O'clock Family (Nyctaginaceae) has a number of genera with unusual morphological and ecological characters, several of which appear to have a "tendency" to evolve repeatedly in Nyctaginaceae. I present a molecular phylogeny for the Nyctaginaceae, consider taxonomic implications, biogeographic patterns, and the evolution of cleistogamy and gypsophily. These characters have each evolved multiple times in the xeric-adapted genera of the family. Further progress towards understanding these phenomena requires specific investigation of the ecology of pollination and gypsum tolerance. In the genus Boerhavia, an intensively sampled phylogeny based on internal transcribed spacer (ITS) and nitrate reductase (NIA) sequences provides new insights into relationships among species in the genus, and identifies a clade of annual species centered in the Sonoran Desert. Phylogeographic patterns are present in the genus that may reflect both relatively ancient vicariant events as well as the post-Pleistocene expansion of the Sonoran Desert. Many species in this group are found to be genetically cohesive, however two annual species complexes are found which species were nonmonophyletic. Since several mechanisms can potentially lead to the finding of nonmonophyletic species, Amplified Fragment Length Polymorphisms (AFLPs) were used to examine the structure of genetic variation in the two complexes. These data show that in these two groups, different evolutionary mechanisms are needed to explain the distribution of genetic diversity within and among populations. A complex comprised of Boerhavia spicata and B. xanti shows little evidence of genetic divergence between the species in Sonora, a pattern which may indicate recent contact between two very closely related forms. In contrast, high genetic structure between populations is found in the other complex, which contains the species with umbellate inflorescences. This complex includes several nominal species with highly restricted distributions, whose evolution may have been facilitated by low gene flow among populations. Little evidence was found for associations of inbreeding within populations, and floral traits which might be expected to influence outcrossing rates.
Type
Dissertation
Department
Biology
Subject
Nyctaginaceae
Boerhavia
Phylogeny
Diversification
Deserts
Plants
Permalink
https://hdl.handle.net/10161/188
Citation
Douglas, Norman Alan (2007). Molecular phylogenetic studies in nyctaginaceae: patterns of diversification in arid North America. Dissertation, Duke University. Retrieved from https://hdl.handle.net/10161/188.
Collections
More Info
Show full item record