Stack Music: Spotify and the Platformization of the Digital Music Commodity 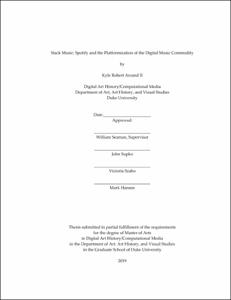 Digital platforms play an increasingly prevalent role in 21st century capitalism. They shape our search results, facilitate our communication habits, structure our workdays, reinforce our communities, and increasingly impact cultural life in ways that extend beyond mere communications. Their interfaces influence decisions about what films to watch, their algorithms recommend what songs and podcasts we enjoy, and their agreements with distributors frequently determine even the most basic access to digital media today. The current largest music streaming service in the world, Spotify plays an important role in cultural life today, asserting itself as a networked intermediary between users, advertisers, and the music industry in an effort to capitalize on the infrastructural aspects of cultural access through ad-supported and subscription- based music streaming options.

This thesis explores what Anne Helmond has called the “platformization” of digital media, with a specific focus on the Swedish music platform Spotify. Building on Jeremy Wade Morris’ notion of the “digital music commodity,” I argue that Spotify’s efforts to situate digital music within their own software system align with recent trends in the technical and intermediary structures known as platforms. The stack, the software scaffolding present beneath nearly all of today’s major platforms, offers a useful lens into discussions of such software intermediaries at scale, providing insight. into the material basis that platforms rely on in daily operation. Each chapter focuses on a single aspect of the organizing logic of Spotify, tracing the broad superstructure of the platform to its source in software tools. Across chapters on machine listening, recommendation algorithms, and digital platforms in totality, the work stresses the ways platforms have become “a new business model capable of extracting and controlling immense amounts of data” with the rise of these large, economy-shaping intermediaries.