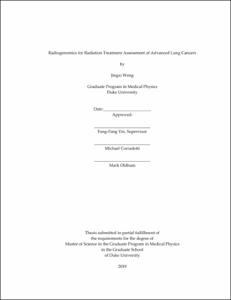 Background: Radiomics describes the study of converting medical images into high-dimensional quantitative features and following analysis for further decision making and genomics focuses on the understanding genomes of individual organisms and characterizations of different genomes. Radiogenomics is a new emerging method that combines both radiomics and genomics together in clinical studies as well as researches the relation of genetic characteristics and radiomic features. It has the potential as a tool for medical treatment assessment in the future. In this study, we used machine learning methods to build two models for treatment assessment: 1) the output is p53 mutation, and the inputs are radiomic features; 2) the output is patient overall survival, and the inputs are radiomic features and p53 mutation. The modelling process was divided into feature selection and classification. Machine learning is a popular area of artificial intelligence that can make machines “learn by itself”. Machine learning algorithm learns from datasets called “training data”, and generates a prediction model from its learning process. The prediction model can then be used to make predictions and decisions from other datasets.

Conclusion: From limited dataset, it might be feasible to detect p53 mutation by both pre-Tx and post-Tx radiomics. Lasso and LSVM has shown the best performance in classification.

For predicting the overall patient survival, different features were selected. This may be related to the limited data available for the study. It may also be related to the different characteristics of pre-Tx, post-Tx and delta radiomics. Intensity and texture features showed high frequency being selected for pre-Tx and delta features, and morphological features showed high frequency for post-Tx radiomics. However, we also found that the combination of delta radiomics and p53 mutation showed a better patient survival prediction than pre-Tx, post-Tx, delta radiomics and p53 mutation alone. The reason might be related to the difference of tumor reaction to radiation due to p53 mutation. KSVM and Bagging showed highest performance compared with other classification methods.