Genes, Race, and Causation: US Public Perspectives About Racial Difference 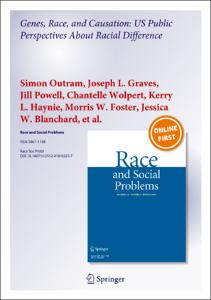 View / Download
823.3 Kb
Date
Authors
Outram, S
Graves, JL
Powell, J
Wolpert, C
Haynie, KL
Foster, MW
Blanchard, JW
Hoffmeyer, A
Agans, RP
Royal, CDM
Show More
(10 total)
Repository Usage Stats
92
views
50
downloads
Abstract
© 2018, Springer Science+Business Media, LLC, part of Springer Nature. Concerns have been raised that the increase in popular interest in genetics may herald a new era within which racial inequities are seen as “natural” or immutable. In the following study, we provide data from a nationally representative survey on how the US population perceives general ability, athleticism, and intellect being determined by race and/or genetics and whether they believe racial health inequities to be primarily the product of genetic or social factors. We find that self-described race is of primary importance in attributing general ability to race, increasing age is a significant factor in attributing athleticism and intellect to genes and race, and education is a significant factor in decreasing such racially and genetically deterministic views. Beliefs about the meaning of race are statistically significantly associated with respect to the perception of athletic abilities and marginally associated with the perception of racial health inequalities being either socially or genetically derived. Race, education, socioeconomic status, and concepts of race were frequently found to be multiplicative in their statistical effects. The persistent acceptance of a genetically and racially deterministic view of athleticism among the White and older population group is discussed with respect to its social impact, as is the high level of agreement that general abilities are determined by race among non-White respondents and those of lower socioeconomic status. We argue that these findings highlight that both biological and non-biological forms of understanding race continue to play a role into the politics of race and social difference within contemporary US society.
Type
Journal article
Subject
Social Sciences
Ethnic Studies
Social Sciences, Interdisciplinary
Sociology
Social Sciences - Other Topics
Race
Genetics
Causality
Health
Determinism
Inequity
SOCIOECONOMIC-STATUS
UNITED-STATES
GENETICS
AMERICANS
REINSCRIPTION
ESSENTIALISM
EXPLANATIONS
PERCEPTIONS
ATTITUDES
ANCESTRY
Permalink
https://hdl.handle.net/10161/19163
Published Version (Please cite this version)
10.1007/s12552-018-9223-7
Publication Info
Outram, S; Graves, JL; Powell, J; Wolpert, C; Haynie, KL; Foster, MW; ... Royal, CDM (2018). Genes, Race, and Causation: US Public Perspectives About Racial Difference. Race and Social Problems, 10(2). pp. 79-90. 10.1007/s12552-018-9223-7. Retrieved from https://hdl.handle.net/10161/19163.
This is constructed from limited available data and may be imprecise. To cite this article, please review & use the official citation provided by the journal.
Collections
More Info
Show full item record Associate Professor of Political Science
Kerry L. Haynie is an Associate Professor of Political Science and African & African American Studies. He directs Duke’s Center for the Study of Race, Ethnicity, and Gender in the Social Sciences, and is one of the editors of the journal, Politics, Groups, and Identities. A native of Kannapolis, North Carolina, he received his B.A.(1985) and Ph.D. (1994) from the University of North Carolina at Chapel Hill. He has a Masters of Public and International Affairs degree from the University of Pittsb Professor of African and African American Studies
Charmaine Royal is Professor of African & African American Studies, Biology, Global Health, and Family Medicine & Community Health at Duke University. She also has appointments in the Duke Initiative for Science & Society and the Kenan Institute for Ethics. At the Duke Social Science Research Institute, she directs the Center on Genomics, Race, Identity, Difference and the Center for Truth, Racial Healing & Transformation. Dr. Royal’s research, scholarship, and t
Alphabetical list of authors with Scholars@Duke profiles.