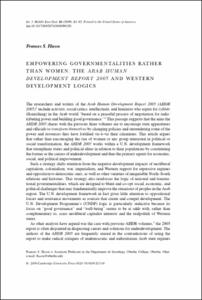 View / Download
125.3 Kb
Date
Author
Hasso, FS
Repository Usage Stats
52
views
28
downloads
Abstract
The researchers and writers of the Arab Human Development Report 2005 (AHDR 2005) include activists, social critics, intellectuals, and feminists who aspire for izdihar (flourishing) in the Arab world "based on a peaceful process of negotiation for redistributing power and building good governance." This passage suggests that the aims the AHDR 2005 shares with the previous three volumes are to encourage state apparatuses and officials to transform themselves by changing policies and surrendering some of the power and resources they have fortified vis-à-vis their citizenries. This article argues that rather than encouraging the rise of women or any group interested in political or social transformation, the AHDR 2005 works within a U.N. development framework that strengthens states and political elites in relation to their populations by constituting the former as the causes of underdevelopment and thus the primary agents for economic, social, and political improvement. © 2009 Cambridge University Press.
Type
Journal article
Subject
Social Sciences
Area Studies
Permalink
https://hdl.handle.net/10161/19492
Published Version (Please cite this version)
10.1017/S0020743808090120
Publication Info
Hasso, FS (2009). Empowering governmentalities rather than women: The Arab Human Development Report 2005 and western development logics. International Journal of Middle East Studies, 41(1). pp. 63-82. 10.1017/S0020743808090120. Retrieved from https://hdl.handle.net/10161/19492.
This is constructed from limited available data and may be imprecise. To cite this article, please review & use the official citation provided by the journal.
Collections
More Info
Show full item record Associate Professor of Gender, Sexuality & Feminist Studies
I am an Associate Professor in the Program in Gender, Sexuality and Feminist Studies at Duke University with secondary appointments in the Department of History and Department of Sociology.  I taught in and directed the International Comparative Studies Program at Duke from 2010-2015 and was a member of the Oberlin College faculty from 2000-2010. I am Editor Emerita (2015-2018) of the Journal of Middle East Wome