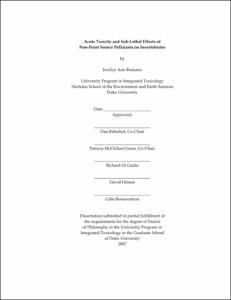 View / Download
2.5 Mb
Date
Author
Romano, Jocelyn Ann
Advisors
Rittschof, Dan
McClellan-Green, Patricia
Di Giulio, Richard
Hinton, David
Bonaventura, Celia
Repository Usage Stats
512
views
1,931
downloads
Abstract
Non-point source pollution is not generated from any single source, rather can arise from a mixture of agricultural, residential, and industrial activities. As a result of these activities millions of tons of chemicals enter into aquatic environments annually with the potential to disrupt the fragile ecosystems existing within. Common anthropogenic compounds most frequently seen in estuarine environments include pesticides, antifoulants, polycyclic aromatic hydrocarbons (PAH), and industrial solvents. This dissertation examines the acute toxicity and sub-lethal effects of diuron, CuPT, B(a)P, and styrene in the mud snail, Ilyanassa obsoleta, the American oyster, Crassostrea virginica, the sea urchin, Lytechinus variegatus, and/or the barnacle, Amphibalanus (= Balanus) amphitrite. In addition, the general effects of non-point source pollution within the Rachel Carson Estuarine Research Reserve (RCERR) were examined at six sites in order to gain a better understanding of the current health of this unique habitat. Of the four compounds tested, only the industrial solvent, styrene, resulted in an LC50 (1341 µg L-1, I. obsoleta) that was within the range of currently reported environmental levels. Diuron and CuPT did not elicit mortality at environmentally relevant concentrations, but did significantly reduce fecundity in I. obsoleta and C. virginica and fertilization success and larval development in L. variegatus. The only notable sub-lethal effect elicited by the PAH, benzo(a)pyrene, was a significant decrease in egg capsule production by I. obsoleta following exposure to concentrations as low as 50 µg L-1. Within the RCERR, animals from Sites 4, 5, and 6 were observed to have significant differences with respect to fecundity, condition index, and/or ECOD activity when compared to conspecific organisms from control Site 1. This is most likely a consequence of their proximity to anthropogenic sources. Large variation in mortality (15-98.9%) was observed when families of A. amphitrite from a single population where exposed to CuPT. It is often difficult to extrapolate data from laboratory findings into natural populations. Frequently the organisms used under laboratory conditions are genetically very similar, while field population can vary with anthropogenic exposure. Caution must be taken when developing protocols for risk assessment to ensure that actual environmental conditions are being represented.
Type
Dissertation
Department
Integrated Toxicology
Subject
diuron
copper pyrithione
styrene
benzo(a)pyrene
lytechinus variegatus
ilyanassa obsoleta
Permalink
https://hdl.handle.net/10161/197
Citation
Romano, Jocelyn Ann (2007). Acute Toxicity and Sub-Lethal Effects of Non-Point Source Pollutants on Invertebrates. Dissertation, Duke University. Retrieved from https://hdl.handle.net/10161/197.
Collections
More Info
Show full item record