Environmental toxicant effects on the dopaminergic system in the nematode Caenorhabditis elegans: Strengths and limitations of various approaches to analysis 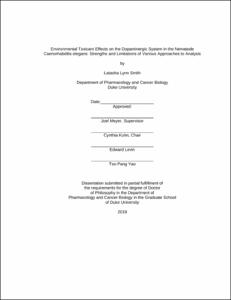 In order to develop a better understanding of the role environmental toxicants may play in the onset and progression of neurodegenerative diseases, it has become increasingly important to optimize sensitive methods for quickly screening toxicants to determine their ability to disrupt neuronal function. The model organism Caenorhabditis elegans can help with this effort. This species has an integrated nervous system producing behavioral function, allows for easy access for molecular studies, has a rapid lifespan, and is an inexpensive model. This project focuses on the development and optimization of a low-cost efficient behavioral tool for the identification of environmental toxicants with actions that disrupt dopamine function in the nematode C. elegans. Several dopamine-mediated locomotory behaviors, Area Exploration, Body Bends, and Reversals, as well as Swimming-Induced Paralysis and Learned 2-Nonanone Avoidance, were compared to determine the best behavioral method for screening purposes. These behavioral endpoints were also compared to morphological scoring of neurodegeneration in the dopamine neurons. We found that in adult worms, Area Exploration is more advantageous than the other behavioral methods for identifying DA-deficient locomotion and is comparable to neuromorphological scoring outputs. For larval stage worms, locomotion was an unreliable endpoint, and neuronal scoring appeared to be the best method. We compared the commonly used dat-1p::GFP reporter strains BY200 and BZ555, and we further characterized the dopamine-deficient strains, cat-2 e1112 and cat-2 n4547. We found that BY200 and BZ555 have differential responses in DA-targeted neurodegeneration using the model toxicant 6-hydroxydopamine, with BY200 appearing to have somewhat increased sensitivity to treatment. In contrast to published results, we found that the cat-2 strains slowed on food almost as much as N2s. Rather than being null mutants, both showed decreased levels of cat-2 mRNA and DA content, with cat-2 e1112 having the greatest reduction in DA content in comparison to N2. Ultimately, we concluded that while behavioral analysis is a promising endpoint, it is probably best used as a quick screening tool, with follow-up studies assessing affects to neuron morphology. A more informative readout of toxicant effects to the DA system would be best accomplished using a combination of the assays outlined in this project. We offer a table at the conclusion of this study comparing strengths, limitations, costs, and equipment needs for the methods of analysis of the dopaminergic system in C. elegans undertaken in this project.