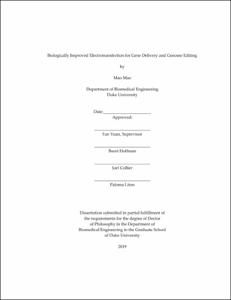 Second phase of this study focuses on the intracellular transport of plasmid DNA, especially the transport of DNA molecules towards degradative compartments. Our data elucidated that components in both endocytic and autophagic pathways are responsible for intracellular trafficking and processing of transfected materials such as pDNA. In addition, we also characterized a new type of vesicle named amphisome-like vesicle (ALB) and revealed its involvement in electrotransfection. Based on these findings, we propose a novel strategy to enhance electrotransfection by blocking degradative routes within the endocytic pathways, which led to the development of a new technique called transfection by redirection of endocytic and autophagic traffic (TREAT). Transfection of plasmid DNA (pDNA), messenger RNA (mRNA), sleeping beauty transposon system (SB), and different forms of CRISPR/Cas9 system by TREAT achieved superior efficiency in various cell lines including difficult-to-transfect human primary cells. In addition, we successfully applied TREAT method to improve clinically relevant applications including SB-based gene integration and CRISPR/Cas9-based editing of T cell receptor alpha constant (TRAC). In summary, we studied the biological mechanism of electrotransfection and developed a general, flexible, and reliable technique to enable highly efficient non-viral gene delivery and genome editing. Furthermore, the insights gained on the mechanism of electrotransfection provide better understanding of cellular response to exogenous materials. In the future, our study could potentially pave new paths for a wide range of research and therapeutic applications such as CRISPR/Cas9 mediated high-throughput loss-of-function gene screening analysis, correction of disease-related mutations, as well as genetic engineering of immune cells and stem cells for transplantation.