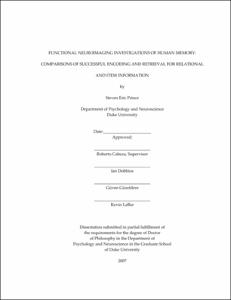 View / Download
3.3 Mb
Date
Author
Prince, Steven Eric
Advisors
Cabeza, Roberto
Dobbins, Ian
Guzeldere, Guven
LaBar, Kevin
Repository Usage Stats
486
views
917
downloads
Abstract
Memory is a complex and multifaceted entity. Cognitive psychology has adopted terminology to help simplify the study of memory. For example, one can consider the cognitive process the brain is engaged in, such as encoding versus retrieval. Similarly, one can consider the content of information, such as words, faces, or scenes. Content and process can also interact such as with instructions to view a face that happens to be situated next to a house (item memory) versus instructions to evaluate whether the face 'belongs' in the house (relational memory). Although neuropsychology, animal lesion studies, and cognitive neuroscience have identified brain structures that are consistently associated with memory performance, such as the medial temporal lobes (MTL) and prefrontal cortex (PFC), the specifics of when and why such regions participate in memory is still largely unexplored. Theoretical standpoints are often at odds about whether regions such as the MTL operate as a functional unit, supporting memory in general, or whether subregions within the MTL support specific types of memory (e.g. item versus relational memory). To investigate how memory processes might recruit unique and common brain regions, three functional magnetic resonance imaging (fMRI) studies were conducted. Each study involved comparisons of successful encoding (trials later remembered versus forgotten) and successful retrieval (hits versus misses). Experiment 1, using semantic and perceptual word pairs, found unique contributions for subregions in the MTL and PFC, dependent on memory phase and stimulus class. One region in the left hippocampus was associated with memory success, regardless of either memory phase or stimulus class. Experiment 2, using faces and scenes, found unique contributions for 'stimulus sensitive' subregions of the fusiform gyrus and parahippocampal gyrus, as well as for the PFC, and MTL that were dependent on content-process interactions, or independent of content and process. Experiment 3, using faces, scenes, and face-scene pairings, found unique contributions for subregions of the MTL and PFC based on item versus relational processing and memory phase. Together, the results of the three experiments provide support for dichotomies in brain structures based on specific processes, specific content, or process-content interactions.
Type
Dissertation
Department
Psychology and Neuroscience
Subject
memory
fMRI
encoding
retrieval
MTL
PFC
Permalink
https://hdl.handle.net/10161/201
Citation
Prince, Steven Eric (2007). Functional Neuroimaging Investigations of Human Memory: Comparisons of Successful Encoding and Retrieval for Relational and Item Information. Dissertation, Duke University. Retrieved from https://hdl.handle.net/10161/201.
Collections
More Info
Show full item record