A Class of Tetrahedral Finite Elements for Complex Geometry and Nonlinear Mechanics: A Variational Multiscale Approach 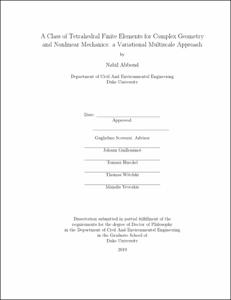 In this work, a stabilized finite element framework is developed to simulate small and large deformation solid mechanics problems involving complex geometries and complicated constitutive models. In particular, the focus is on solid dynamics problems involving nearly and fully incompressible materials. The work is divided into three main themes, the first is concerned with the development of stabilized finite element algorithms for hyperelastic materials, the second handles the case of viscoelastic materials, and the third focuses on algorithms for J2-plastic materials. For all three cases, problems in the small and large deformation regime are considered, and for the J2-plasticity case, both quasi-static and dynamic problems are examined.

Some of the key features of the algorithms developed in this work is the simplicity of their implementation into an existing finite element code, and their applicability to problems involving complicated geometries. The former is achieved by using a mixed formulation of the solid mechanics equations where the velocity and pressure unknowns are represented by linear shape functions, whereas the latter is realized by using triangular elements which offer numerous advantages compared to quadrilaterals, when meshing complicated geometries. To achieve the stability of the algorithm, a new approach is proposed in which the variational multiscale approach is applied to the mixed form of the solid mechanics equations written down as a first order system, whereby the pressure equation is cast in rate form.

Through a series of numerical simulations, it is shown that the stability properties of the proposed algorithm is invariant to the constitutive model and the time integrator used. By running convergence tests, the algorithm is shown to be second order accurate, in the $L^2$-nrom, for the displacements, velocities, and pressure. Finally, the robustness of the algorithm is showcased by considering realistic test cases involving complicated geometries and very large deformation.