Authoritarian Governance and the Provision of Public Goods: Water and Wastewater Services in Egypt 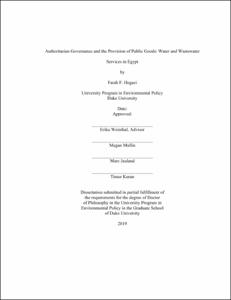 Studies on the effect of regime type on public goods provision have tended to take a quantitative, cross-national approach to examining the relationship between regime type and access to public goods, and have demonstrated that democracies produce better public goods outcomes than non-democracies for a variety of theoretical reasons, including politics being more competitive in democracies, democracies needing to appease a greater proportion of their population, and re-election incentives. Such studies, however, have not aimed to understand which segments of the population receive access to benefits and the literature examining this question has tended to focus on the distribution of benefits in democracies. As such, little is known about how authoritarianism itself affects the distribution of public services.

This dissertation examines how inequalities in access to drinking water and wastewater services arise in authoritarian regimes. In examining Egypt during the period of 1882 to 2015, and using archival documents, census data, electoral returns, and interviews, I find that the groups that are prioritized for receiving access to drinking water and wastewater services differ across the different regimes within this time period, as they are a product of the goals that leaders are seeking to achieve and the structure of the authoritarian political system that is implemented, which affects elite composition, the degree of influence that leaders have over policymaking, and the regime’s relationship with the mass public.

I also find that in the aftermath of the Arab Uprisings, self-undermining policy feedbacks, which occur when those who are not benefitting from government policy that is currently in place push for significant changes in policy, can affect the state’s response to expressed discontent regarding the state of public services, but that democratization is not necessarily correlated with greater investment in public services.

Overall, the findings emphasize that political will plays an important role in affecting the distribution of public services in an authoritarian setting.