The Contribution of Horizontal Gene Transfer to the Evolution of Fungi. 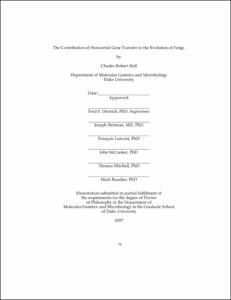 View / Download
14.6 Mb
Date
Author
Hall, Charles Robert
Advisors
Dietrich, Fred S
Heitman, Joseph
Lutzoni, Francois
McCusker, John
Mitchell, Thomas
Rausher, Mark
Repository Usage Stats
914
views
937
downloads
Abstract
The genomes of the hemiascomycetes Saccharomyces cerevisiae and Ashbya gossypii have been completely sequenced, allowing a comparative analysis of these two genomes, which reveals that a small number of genes appear to have entered these genomes as a result of horizontal gene transfer from bacterial sources. One potential case of horizontal gene transfer in A. gossypii and 10 potential cases in S. cerevisiae were identified, of which two were investigated further. One gene, encoding the enzyme dihydroorotate dehydrogenase (DHOD), is potentially a case of horizontal gene transfer, as shown by sequencing of this gene from additional bacterial and fungal species to generate sufficient data to construct a well-supported phylogeny. The DHOD-encoding gene found in S. cerevisiae, URA1 (YKL216W), appears to have entered the Saccharomycetaceae after the divergence of the S. cerevisiae lineage from the Candida albicans lineage and possibly since the divergence from the A. gossypii lineage. This gene appears to have come from the Lactobacillales, and following its acquisition the endogenous eukaryotic DHOD gene was lost. It was also shown that the bacterially derived horizontally transferred DHOD is required for anaerobic synthesis of uracil in S. cerevisiae. The other gene discussed in detail is BDS1, an aryl- and alkyl-sulfatase gene of bacterial origin that we have shown allows utilization of sulfate from several organic sources. Among the eukaryotes, this gene is found in S. cerevisiae and Saccharomyces bayanus and appears to derive from the alpha-proteobacteria.
Type
Dissertation
Department
Molecular Genetics and Microbiology
Subject
horizontal gene transfer
lateral gene transfer
Saccharomyces cerevisiae
biotin
uracil
sulfatase
Permalink
https://hdl.handle.net/10161/202
Citation
Hall, Charles Robert (2007). The Contribution of Horizontal Gene Transfer to the Evolution of Fungi. Dissertation, Duke University. Retrieved from https://hdl.handle.net/10161/202.
Collections
More Info
Show full item record