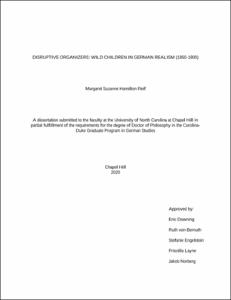 View / Download
1.4 Mb
Date
Author
Reif, Margaret
Advisors
Downing, Eric
von Bernuth, Ruth
Engelstein, Stefani
Layne, Priscilla
Norberg, Jakob
Repository Usage Stats
77
views
288
downloads
Abstract
This dissertation explores the intersection of childhood and wildness within the literary movement of German realism. The latter half of the nineteenth century saw the introduction of mandatory education and the consolidation of the middle-class family, both of which established childhood as a distinct phase. The literary movement of German realism emerged at the same time, with a focus on representing ordinary life and experiences with a particular concentration on bourgeois values and norms.. But many children in the works of this movement prove more fantastical than realistic, more extraordinary than ordinary, and more deviant than safely bourgeois. This study therefore examines how representations of wild children interact with the aesthetics of the average within German realism. Ultimately, this dissertation has two main points: First, depictions of wild children should not be read solely as a means of celebrating the average, middle class reality of the nineteenth-century through a strategy of the literary containment of wild children. Rather, the wild child initiates a redemptive transformation of reality and is a means for introducing that which would otherwise escape representation in realist prose fiction. Second, the frequent appearance of wild children within the literary movement of German realism serves as a rhetorical strategy to depict a changing nineteenth-century reality with regard to education, family, gender, nation and art, as well as a means to question the success of these structures. In order to make these arguments, this dissertation engages with four types of wild children: literary descendants of Goethe’s Mignon, fairytale children, differently abled children associated with the figure of Kaspar Hauser, and criminal children. It also considers the intersection of gender and wildness and the ways in which the language of wildness, culture and civilization have been used in Western literary traditions, particularly in a late-nineteenth-century German context.
Type
Dissertation
Subject
Germanic literature
German realism
Permalink
https://hdl.handle.net/10161/20632
Citation
Reif, Margaret (2020). Disruptive Organizers: Wild children in German realism (1850-1900). Dissertation, Duke University. Retrieved from https://hdl.handle.net/10161/20632.
Collections
More Info
Show full item record