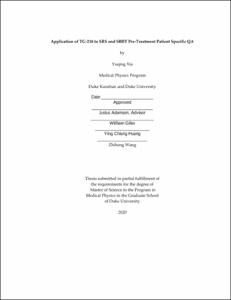 Purpose: Updated recommendations for pre-treatment QA of patient-specific intensity modulated radiation therapy (IMRT) and Volumetric modulated arc therapy (VMAT) quality assurance (QA) were recently published by the AAPM task group TG-218. While the traditionally most common QA analysis is to use a Gamma index with dose & spatial analysis criteria of 3% & 3mm, respectively, TG-218 recommends a tighter spatial tolerance of 2mm for standard IMRT QA, and that even tighter tolerances should be considered for stereotactic radiosurgery (SRS) and stereotactic body radiotherapy (SBRT). Our purpose is to report our experience with applying the TG-218 recommendations to a large clinical SRS and SBRT program. In addition, a new SRS technique was recently developed at Duke, called Conformal Arc Informed Volumetric Modulated Arc Therapy (CAVMAT), which is designed to be less sensitive to configuration and delivery errors. We measured the agreement of CAVMAT for pre-treatment QA and compared it to the current standard (VMAT) to evaluate whether CAVMAT is more robust to delivery errors than VMAT.

To compare CAVMAT and VMAT, log file analysis and pre-treatment QA was performed for 10 patients with 20 plans (10 VMAT, 10 CAVMAT) with 46 targets in total. 10 VMAT plans were re-planned using CAVMAT, and the dosimetric effect due to treatment delivery errors was quantified for V6Gy, V12Gy, and V16Gy of healthy brain along with the maximum, average and minimum doses of each target. Gamma analysis of VMAT and CAVMAT plans was performed using Delta4 and SRS MapCHECK with 3% / 1mm, 2% / 1mm, 1% / 1mm criteria to assess the agreement during patient specific quality assurance.

Conclusion: For most QA devices, spatial tolerance of pre-treatment QA for SRS/SBRT can be tightened to 1mm while still maintaining an in-control QA process. The gamma criteria to 3%/1mm for all SRS cases and SBRT with IMRT and transitioning to a 4%1mm criteria for SBRT with VMAT have a spatial tolerance that is appropriate for the radiotherapy technique while not resulting in an excessive false positive failure rate. The CAVMAT treatment planning technique resulted in superior gamma analysis passing rate for each gamma analysis criteria.