‘I no longer fear testing’: investigating young people’s experiences of and preferences for oral HIV–self testing programs on college campuses in Zimbabwe 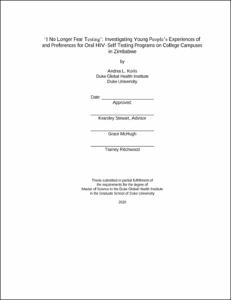 Background Adolescents and young people face social, structural, and systems-level barriers which prevent them from accessing facility-based HIV testing, leading to delays in knowledge of HIV diagnosis and subsequent linkage to care. The World Health Organization (WHO) recommends oral mucosal transudate HIV self-testing to augment HIV testing services, and it may serve as an entry point for young people to engage with the HIV prevention and care cascade. However, presently young people across sub-Saharan Africa lack access to HIV self-test kits, which are available only at facility-based testing sites, through piloted distribution, or for purchase at prohibitive costs in private pharmacies. Youth-friendly distribution models for HIV self-testing are required. This study assessed 1) young people’s experiences of, and preferences for, campus-based HIV self-test distribution at tertiary level colleges in Zimbabwe; and 2) provider perceptions of the feasibility of scaled campus-based HIV self-test distribution across Zimbabwean tertiary schools.