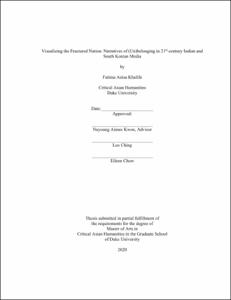 This thesis examines popular Indian and South Korean film and television media which depicts the nation in the context of postcolonial division. Specifically, it looks closely at portrayals of anti-colonial struggle and partition, cross-border encounters, and revisionist nationalist narratives. This analysis illustrates the potential of such media to simultaneously gesture towards reconciliation between populations that have emerged as enemies despite their origins as one nation, and fail to exceed the limits of post-colonial, post-partition ideas of the nation-state and its formation of citizenship. The possibilities of these portrayals lie in their ability to both predict and produce public sentiment, as they provide an outlet for national discourse negotiating exclusion and belonging.