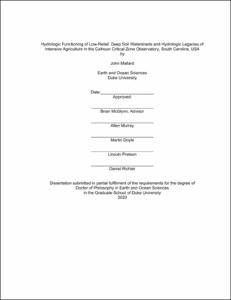 Watersheds are complex, three dimensional structures that partition water between the components of the water balance and multiple storage pools within the watershed. This central function, however, remains poorly understood in a broadly transferable way despite decades of research. Perhaps one reason for this is the disciplinary bias towards studying pristine, mountainous watersheds with steep terrain and shallow soil. Although the relative simplicity of such systems has made them ideal hydrologic laboratories, understanding how watersheds function globally will require the incorporation of new types of landscapes into the studies of hillslope and watershed hydrology.

The Southern Piedmont region of the United States is situated between the Appalachian mountains and Atlantic coastal plains and stretches from Alabama to Maryland. It’s generally rolling terrain if underlain by deeply weathered and highly stratified soil characterized by relatively shallow argillic Bt horizons while weathered saprolite can extend tens of meters deep. Although it is a low-relief landscape, headwaters are often highly dissected with steep narrow valleys containing temporary streams surrounded by diverse topography. The region represents an ideal opportunity to incorporate more diverse landscapes into our studies of watershed hydrology.

As part of the NSF funded Calhoun Critical Zone Observatory, we intensively instrumented a 6.9 ha headwater (watershed 4, WS4), along with other targeted sensor locations including discharge in the 322 ha watershed that contains it (Holcombe’s Branch, HLCM), a nearby meteorological station, a deep groundwater well on a relatively flat interfluve, and a small network of wells in the buried floodplain. Sensors were continuously monitored for over 3 years while logging at 5 minute intervals. This sensor network allowed us to quantify the timing and magnitude of runoff, precipitation, deep and shallow groundwater levels distributed across a watershed, and soil moisture at multiple depths and hillslope positions. By doing so we were able to 1) describe the interactions between water balance components in WS4, 2) compare these watershed-scale measurements to internal hydrologic dynamics to determine what parts of the watershed are responsible for distinct watershed functions, and 3) explore how headwaters connect to higher order streams.

Using the monthly water balance in WS4, we calculated changes in integrated watershed storage and then derived a cumulative monthly storage time series from its running integral. We found that storage changes within the year by hundreds of millimeters (~25% of annual precipitation) in conjunction with seasonal peaks in evapotranspiration. Additionally, of all the potential variables that correlated to runoff magnitudes at the watershed scale, we found storage to be the best, particularly above a threshold value which remained remarkably consistent across all three years even with substantial differences in precipitation.

However, despite the storage threshold dependence of runoff, when we calculated daily storage we found that while runoff increased primarily in response to major precipitation events and then decreased again shortly thereafter, storage primarily wet up once from its low point at the end of the growing season and then drained starting at the growing season and continuing through the summer. Similarly, individual measurements of internal watershed hydrology like soil moisture or water table level displayed either seasonal or event-scale changes. We determined that measurements taken at watershed positions with more convergent hillslopes, or farther from the watershed divide, or installed deeper in the soil are more likely to display seasonal changes, and vice versa for event-scale changes. These three gradients are essentially proxies for vertical, lateral, and longitudinal distances, and so it appeared that the underlying gradient being measured was actually contributing volume. We determined the functions of different landscape components based on this analysis, and came to understand that storage-linked sites wet up first and then stay consistently so, making conditions for runoff. Subsequently, when runoff-linked sites wet-up, they mobilize significant runoff fluxes either by hydraulic displacement, or interflow, or a transmissivity feedback, or likely some combination of them all. During these times a substantial portion of the watershed is connected before drying down again with the exception of more storage-linked locations.

The result of this threshold setting followed by large runoff events is extremely flashy outputs from WS4. In contrast, we found HLCM to be far less flashy and relatively less sensitive to year to year fluctuations in precipitation. Further, we observed that except in the most extreme storms, surface flow from WS4 across the former floodplain in between it and HLCM always fully infiltrates into the sandy, legacy sediments deposited along the entire former floodplain. These sediments are the legacy of centuries of intensive and poorly managed agriculture across the Southern Piedmont. Wells in these sediments revealed a highly dynamic water table that was very responsive to outflow from WS4. A simple geometric simplification of the shape of these sediments and an estimate of their porosity revealed that these sediments had ~900 m3 of available storage space, space that was constantly filling and draining. Interestingly, that available storage volume level was sufficient to absorb discharge from WS4 on 97% of the days we measured. Through most of WS4 flow states, this storage served to buffer HLCM from flashier runoff coming from WS4, and then subsequently releasing it much more slowly and drawn out as shallow subsurfaceflow. However, when it reached volumes within 15% of maximum, usually in conjunction with large fluxes coming from WS4, runoff in HLCM reacted closely with WS4. So the storage volume in legacy sediments serves as an effective buffer from flashy upstream hydrology, but when the reach or approach saturation they become effective at transmitting surface flow, likely via saturation excess. Although we observed this phenomenon in only one alluvial fan, we have reason to think that such features are quite common locally and regionally, and represent a heretofore underappreciated legacy of historic agriculture.

Taken together, these findings describe a hydrologic system that is much more dynamic than its abundant rainfall and surface water resources would suggest. Further, they indicate that even a century or more after agricultural land abandonment and forest regrowth, legacies of the 18th and 19th century remain in the landforms and soils of the region. We feel that these findings are strong support for continued and expanded hydrologic study at the CCZO and in the Southern Piedmont in general.