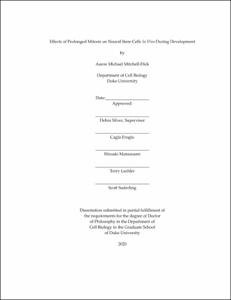 Through in vivo pharmacological approaches, and in vitro culture of human neural progenitors, I provide evidence that prolonged mitosis in vivo directly alters cell fate, and that this consequence of prolonged mitosis is conserved from mice to humans. I find prolonged mitosis of neural stem cells in vivo results in increased phosphorylation of H2AX in mitosis, and increased pATR in a subset of newborn cells. P53 is then activated in a subset of daughter cells and upregulates downstream target genes. Within approximately the first cell cycle, prolonged mitosis results in an increase in neurogenic fates in the daughter cell population at the expense of progenitor renewal. Conditional loss of P53 rescues these effects on cell fate, while loss of BAX does not. Additionally, I find that time to cell death occurs on a log-normal distribution within the population. These experiments suggest that identifying the factors sensitive to prolonged prometaphase/mitosis arrest that transduce P53 activating signals is critical for our understanding of microcephaly etiologies. Together, data presented in this thesis suggest prolonged mitosis directly alters cell fate in vivo during cortical development and in human neural stem cells, that response to prolonged mitosis is relatively specific, involving P53 signaling, and that prolonged mitosis is a main contributing factor to microcephaly as a result of mitotic gene disruption.