Evolutionary Trends in the Individuation and Polymorphism of Colonial Marine Invertebrates 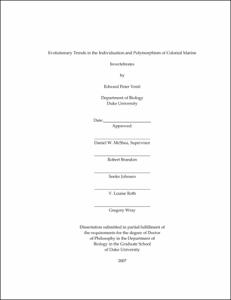 View / Download
1.6 Mb
Date
Author
Venit, Edward Peter
Advisors
McShea, Daniel W.
Brandon, Robert
Johnson, Sonke
Roth, V. Louise
Wray, Gregory
Repository Usage Stats
640
views
2,484
downloads
Abstract
All life is organized hierarchically. Lower levels, such as cells and zooids, are nested within higher levels, such as multicellular organisms and colonial animals. The process by which a higher-level unit forms from the coalescence of lower-level units is known as “individuation”. Individuation is defined by the strength of functional interdependencies among constituent lower-level units. Interdependency results from division of labor, which is evidenced in colonial metazoans as zooid polymorphism. As lower-level units specialize for certain tasks, they become increasing dependant on the rest of the collective to perform other tasks. In this way, the evolution of division of labor drives the process of individuation. This study explores several ways in which polymorphism evolves in colonial marine invertebrates such as cnidarians, bryozoans, and urochordates. A previous study on the effect of environmental stability on polymorphism is revisted and reinterpreted. A method for quantifying colonial-level individuation by measuring the spatial arrangement of polymorphic zooids is proposed and demonstrated. Most significantly, a comparison across all colonial marine invertebrate taxa reveals that polymorphism only appears in those colonial taxa with moderately to strongly compartmentalized zooids. Weakly compartmentalized and fully compartmentalized taxa are universally monomorphic. This pattern is seen across all colonial marine invertebrate taxa and is interpreted as a “rule” governing the evolution of higher-level individuation in the major taxa of colonial marine invertebrates. The existence of one rule suggests that there may be others, including rules that transcend levels of biological hierarchy. The identification of such rules would strongly suggest that new levels in the hierarchy of life evolve by a universal pattern that is independent of the type of organism involved.
Type
Dissertation
Department
Biology
Subject
Individuation
Division of Labor
Polymorphism
Colony
Hierarchy
Colonial Marine Invertebrates
Permalink
https://hdl.handle.net/10161/213
Citation
Venit, Edward Peter (2007). Evolutionary Trends in the Individuation and Polymorphism of Colonial Marine Invertebrates. Dissertation, Duke University. Retrieved from https://hdl.handle.net/10161/213.
Collections
More Info
Show full item record