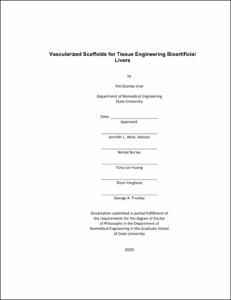 Liver tissue engineering has made tremendous progress over the last decades, but continues to be limited by dedifferentiation of hepatocytes and insufficient vascularization of engineered constructs.1 Functional hepatocytes are the parenchymal liver cells and they are responsible for many of the over 500 essential liver functions. Thus, they are necessary for advancement toward effective liver disease treatments, predictive models for drug screening, and whole-organ tissue engineering.2

Liver-specific functions of hepatocytes are known to be regulated by complex microenvironmental cues that are not fully understood and are difficult to recapitulate in vitro. These signals are known to include homotypic interactions with other hepatocytes, heterotypic interactions with non-parenchymal cells, biochemical cues from surrounding extracellular matrix, and signals and sustenance from the underlying vasculature.3 The objective of this work was to investigate material properties and culture conditions that are conducive to the long-term culture of functional primary hepatocytes in order to design a platform capable of supporting them. We found that coculturing hepatocytes in adhesive and degradable hydrogels with capillary forming endothelial cells (EC) and supporting pericytes formed vascularized liver tissue-like constructs. Over time, we found that hepatocytes and vascular cells in these constructs formed close synergistic associations. While hepatocytes enhanced vascularization, microvascular networks supported at least 3 major hepatocyte functions for at least 2 months.

Then we translated our platform into a bioartificial liver for acute liver failure therapy. Bioartificial livers, are extracorporeal life-saving treatments similar to dialysis for patients with acute liver failure who are awaiting a transplant. These devices often to employ hepatocytes in cartridges filled with semi-porous hollow fibers to perfuse patient blood and temporarily off-load the patient’s liver functions, reducing blood toxicity and preserving the function of other organs in the body while the liver repairs itself. However, they are limited in that the hepatocytes used are either short-lived hepatocytes or hepatocyte derivatives that have lost essential functions during their transformation. They are also enormously large, costly, challenging to maintain, and difficult to use. Since our platform is prevascularized and capable of supporting hepatocyte function, we examined its potential to alleviate some of these issues.

Not only were ECs and pericytes able to form robust vascular networks in the context of a perfused hollow fiber-based cartridge, but they were able to anastomose to the hollow fibers and enhance mass transport of nutrients into the surrounding hydrogel and hepatocytes. Thus, we developed a module that effectively bridges macro-to-micro scale mass transport using hollow fibers as conduits for efficient, artery scale fluid transport and cell-assembled microvasculature to perfuse the engineered tissue and facilitate exchange of nutrients and metabolic waste with functional cells, interstitial fluids, and the bulk fluid from the hollow fiber. Upon the addition of hepatocytes in the bioreactor platform, we observed maintenance of liver synthetic and metabolic functions for at least 1 month, the length of time it takes a severely damaged liver to regenerate without further complications. The findings in this work serve as a proof-of-concept for future studies that further optimize the bioreactor further and examine its potential toward viable liver disease treatments.