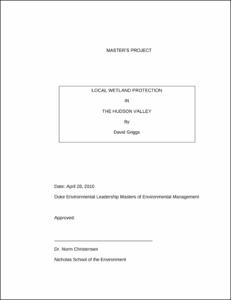 View / Download
965.8 Kb
Date
Author
Griggs, David
Advisor
Christensen, Norm
Repository Usage Stats
381
views
2,119
downloads
Abstract
A 2001 US Supreme Court decision limiting the scope of Section 404 of the Clean Water Act by eliminating federal authority over isolated wetlands has shifted the burden for regulating wetlands to states and local governments. Given New York State’s current wetland regulations, the gap in the federal wetland regulations can not be filled at the state level. This study centered on the question of whether local wetland protection ordinances can fill this regulatory gap. Local wetland protection laws in the Hudson Valley were surveyed to provide insight into how many municipalities have local wetland protection ordinances, and to provide data as to the level of wetland protection. Of the 240 towns and villages located in the 10 counties in the Hudson Valley, only 30 percent have local wetland protection laws. Most of these municipalities also regulate buffers around wetlands and watercourses. Almost half of the municipalities with ordinances regulate wetland areas down to no minimum size threshold which includes isolated wetlands, which therefore exceeds federal wetland regulations and fills this regulatory gap. The study also included an analysis of municipalities that recently have passed, failed or is currently pursuing wetland protection ordinances to determine what challenges and issues were faced and what elements of the law required compromising. Officials agreed getting the public involved early in the procedures was the most important issue. Political alignment was proved to determine the likelihood of a municipality to have such ordinances. Municipalities that failed to implement wetland protection regulations appeared to result from misinformation or a lack of information provided to the public. The most controversial element of these regulations is the buffer areas. Most towns had to compromise on the buffer areas. A grandfathering clause was also significant in getting the public to endorse the new regulations. Typically, activities surrounding residential and agricultural properties were important issues. Several recently passed wetland and watercourse regulations were the result of public concern for health and safety issues such as flooding events.
Type
Master's project
Department
Nicholas School of the Environment and Earth Sciences
Subject
Wetlands
protection
Permalink
https://hdl.handle.net/10161/2174
Citation
Griggs, David (2010). Local Wetland Protection in the Hudson Valley. Master's project, Duke University. Retrieved from https://hdl.handle.net/10161/2174.
Collections
More Info
Show full item record