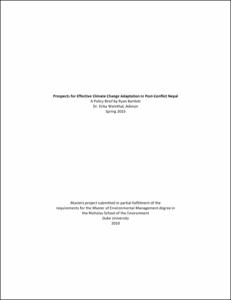 View / Download
10.6 Mb
Date
Author
Bartlett, Ryan
Advisor
Weinthal, Erika
Repository Usage Stats
314
views
219
downloads
Abstract
For the developing world, the impacts of climate change - from sea level rise and more potent and erratic precipitation patterns to rapid deglaciation - are becoming an increasingly frightening reality. Adaptation planning has thus become critical for policymakers in developing countries as these impacts begin to have serious detrimental economic and social implications. Due to a lack of data in many regions, the difficulty of scaling down global circulation models to the country level, and the relative nascence of adaptation theory and policy, however, there is little guidance as to what interventions are likely to be most effective, especially in post-conflict developing countries that face a number of institutional capacity constraints due to years of instability. Focusing on one such highly vulnerable country, this brief assesses the prospects of effective adaptation in post-conflict Nepal. Based on a comprehensive literature review of likely impacts, post-conflict resource management, and adaptation theory and context, followed by informal interviews with relevant stakeholders in Kathmandu and the remote Himalayan middle hills, it is clear that key institutional reforms addressing critical failures of governance, alongside immediate infrastructure development, are crucial for successful adaptation to ultimately occur.
Type
Master's project
Department
Nicholas School of the Environment and Earth Sciences
Subject
Climate change adaptation post-conflict Nepal Himalayas
Permalink
https://hdl.handle.net/10161/2186
Citation
Bartlett, Ryan (2010). Prospects for Effective Climate Change Adaptation in Post-Conflict Nepal. Master's project, Duke University. Retrieved from https://hdl.handle.net/10161/2186.
Collections
More Info
Show full item record